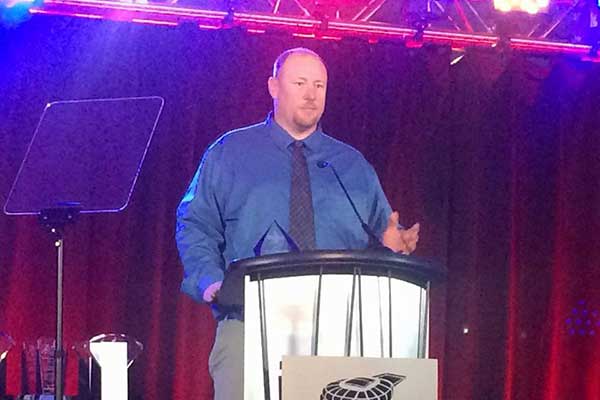 Safford – Lee Patterson, play by play announcer for KATO 1230 AM radio, has been awarded the Skip Bryant Award by the Arizona Interscholastic Association (AIA). The award was presented at the Champion Luncheon on Monday, May 21st, 2018 at University of Phoenix Stadium. The award is named for Skip Bryant, who was a prep sports writer for 50 years in the Phoenix area. It is awarded to a top media contributor to high school athletics in Arizona.

Patterson has been the play by play announcer on KATO for 18 years, covering Southeastern Arizona high schools. He has called more than 200 football games and 300 basketball games for Fort Thomas, Pima, Thatcher and Safford High Schools.

“To be honest,” Patterson said, “I didn’t know about this award until the day Jose Garcia called me to inform me that I was this year’s recipient. After I hung up with Jose, I had to research the man the award was named for. What I found blew me away. Skip was the cream of the crop for nearly 50 years. To be honored with the award named for him is humbling. This is the end of my 18th year of broadcasting rural Southeastern Arizona sporting events. I’ve been fortunate enough to have been involved in 13 football state championships and 22 total state basketball championships. I’d like to say I can take credit for that. I can’t, though. That is a direct reflection of how much talent and dedication there is in the Gila Valley. I’m just lucky enough to be the guy with the microphone.”