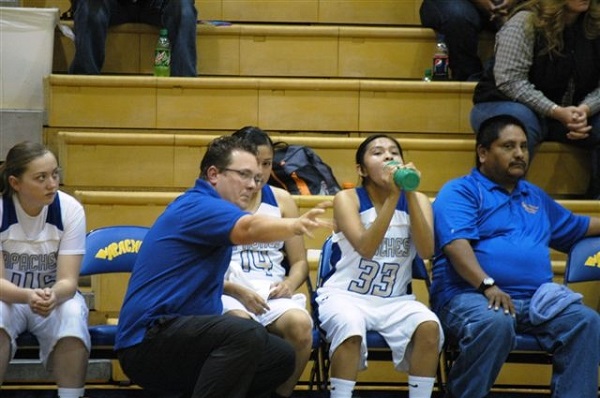 Lee Haws coaches his team from the sideline. File Photo

The Fort Thomas School Board voted 5-0 to not renew Lee Haws as the Girls Varsity Basketball coach for the 2019/2020 season. Haws will still serve as the school’s Athletic Director and softball coach.

The vote came as a shock to Haws and many of his former and current players.

In 12 seasons as the girls hoops coach Haws has racked up one of the most impressive resumes in small school coaching history. Fort Thomas’ record with Haws as coach is 265-92. That is an average of 22 wins and just 7 losses per season.

The Lady Apaches have been to two sweet 16’s, six elite 8’s, three final four’s and were the state runners up one time.

In a phone interview Haws said that he enjoyed every minute of being the girls coach at Fort Thomas. “I’ve really enjoyed the relationships I’ve made in 12 years here,” he said. “Every year our goal was a state championship but that isn’t the only goal. Making sure these student athletes are ready for life after high school was just as important,” Haws added.

Several people in attendance at the June 13th meeting have said that the School Board’s reasoning was that in 12 years Haws hasn’t won a Gold Ball and it’s time to move on. The meeting minutes haven’t been posted to the district’s website as of Wednesday night.

Haws also states he will continue to coach the summer team until another coach is named.