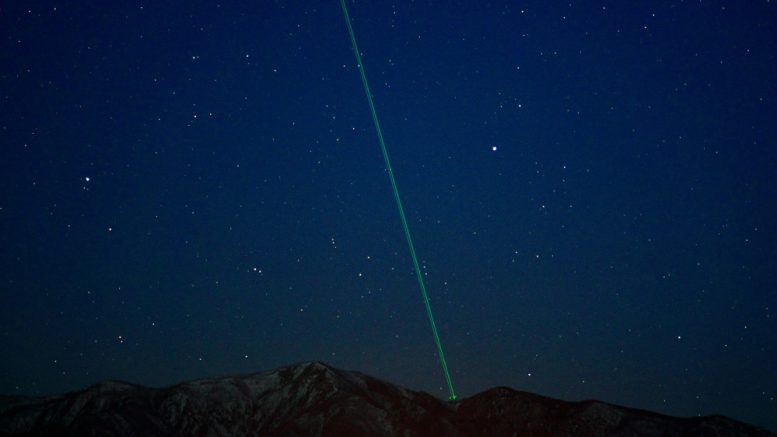 Eric Burk Photo/Gila Valley Central: The Large Binocular Telescope beams a pair of lasers into the sky over Graham County. In this image taken after moonset, the laser beam appears brighter than to the naked eye due to a long camera exposure.

MOUNT GRAHAM – What can resemble a weapon right out of Star Wars is actually a tool to help scientists learn more about our universe, rather than destroy planets.

Although the Large Binocular Telescope (LBT) at the Mt. Graham International Observatory (MGIO) is equipped with a pair of lasers powerful enough to cut metal and simulate stars, the scientists who work with the lasers are not interested in developing destructive powers in their lair atop Mount Graham. Instead, the lasers are part of a system that removes atmospheric distortion from telescopic images, a problem that plagues ground-based telescopes.

Unlike the LBT, the Hubble Space Telescope and other space-based observatories do not have to peer through the earth’s atmosphere, thus avoiding distortion that plane spotter Paul Schulz likens to heat waves in the summer raising from U.S. Highway 70. To match that higher image quality, the LBT uses two main systems: the lasers, and a system called Advanced Rayleigh-guided Ground layer adaptive Optics System (ARGOS) that moves two of the telescope’s mirrors to compensate for the distortion.

According to Schulz, the lasers are powerful enough to shine to 12 kilometers or about seven and a half miles high, where they reflect off molecules in the atmosphere, simulating a star. The telescope’s optics detect the artificial star, and computers measure the atmospheric disturbance. Then, a system of 672 magnetic actuators moves the secondary mirror on the telescope to match the distortion. Since the telescope is a binocular observatory, matching systems do the same on the other side of the telescope. Schulz says they are still experimenting with and testing the systems. 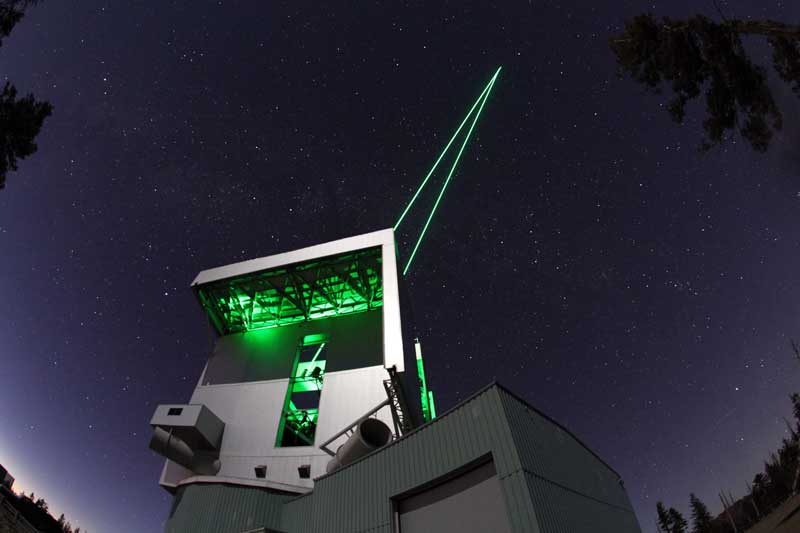 Contributed Photo/Courtesy Dan Best: The LBT utilizes lasers to help defeat atmospheric distortion. The lasers will be utilized through March 13.

“Two years ago plus when they first had these lasers turned on, they were very, very bright, brighter than initially anticipated, so I know that they actually turned the brightness down,” he said.

As a result, those who have seen the lasers before may notice that they are dimmer. On moonlit nights like those this week, the lasers may be difficult to see from Safford, but Schulz notes that binoculars will help. Gila Valley Central could not see the laser until after the moon had set early on Thursday morning. Schulz says the laser typically stays on until 6 a.m, and will be running nightly through Monday, March 13.

Commercial aircraft typically cruise at around six miles of altitude and most private aircraft fly even lower, so the laser can be a hazard to instrumentation and the pilots. The Federal Aviation Administration requires the observatory to turn the laser off when aircraft are near the beam, so the observatory has a team of plane spotters, including Schulz. Four spotters go up each night and work in teams of two, rotating every hour or two. Schulz said there is also a system of transponders that will turn the lasers off should the spotters miss a plane.

“We’ve never had any, any, any, never, ever, ever had any aircraft fly into the laser beams,” Schulz said. “That’s how reliable we are.”