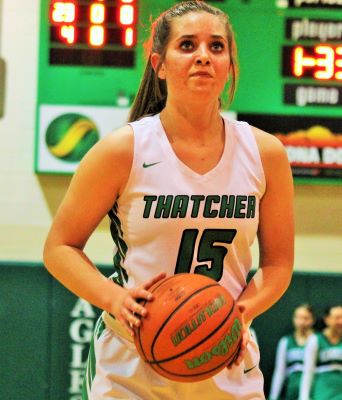 Cassidy Wakefield readies at the foul line in Tuesdays win over Florence. Photo by Ricky Crisp

Special to GilaValleyCentral by Ricky Crisp

THATCHER — Overcoming a first-half rut Thatcher broke a half-time lead thanks to a strong second half to take down Florence on Tuesday night.

Before the game Thatcher’s head coach Dennis Griffin gave his thoughts on his squad going up against Florence.

“Florence is a really good team. We are going to have to play tough and be smart to give ourselves a chance to win this game. It’s going to be a fun game.”

In the first half, the Eagles could not hit the open jump shot and struggled with multiple second chance shots, which kept the Gophers in the game when being down 5-2 to end the first quarter.

The Eagles went on a 6-2 run to start the second quarter, but with multiple turnovers and hitting a cold streak on offense, the Gophers were able to take advantage going on a 7-0 run to tie the game at 11 heading into half-time.

Thatcher came into the second half looking like a whole different team.

Mia Carter was able to penetrate to the hoop and dish off two quick assists to Ashlyn Thompson to go up by 4 early in the third quarter.

Thompson’s scoring seven straight points gave the Eagles offense a jolt and their largest lead of the game.

Florence had no answers on offence, forcing up difficult shots and turning the ball over multiple times to Thatcher’s full court pressure and physical defense which led to them scoring only six points in the second half.

With the Eagles clicking on all cylinders as a team, Cassidy Wakefield and Olivia Lunt kept crashing the boards and taking advantage of second chance opportunities.

Lunt had a game high and a double-double with 20 points and 11 rebounds, helping her team polish of the Gophers and ending their chances of any type of a comeback.

“At half-time one of are assistant coaches told us this is it and this may be the last game for some people and we need to go all out and leave everything on the court and finish and move onto the next game,” said Lunt. “We need to start off strong in our next game and finish that way as well.”