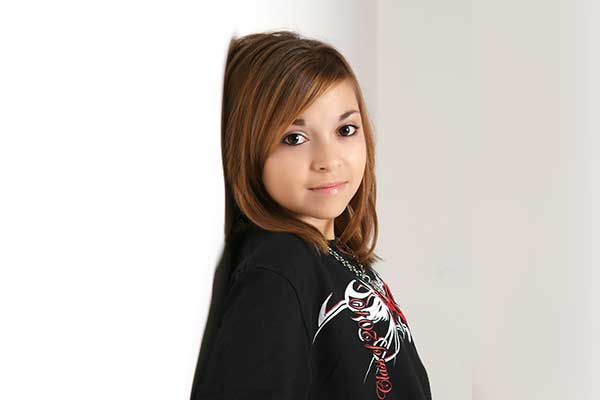 Kristie Arlene Bahschnitt entered into eternal rest surrounded by her loved ones, January 11, 2021, at the Tucson Medical Center, following a valiant fight with complications from cancer. She was the daughter of Kenneth and Sherry (Kingsley) Bahschnitt of Morenci, AZ.

Kristie was diagnosed with Childhood Rhabdomyosarcoma in 1996, she was 6 years old. In 1997, after a year of intense chemotherapy and radiation, the tumor was removed. Due to the location of the tumor and such aggressive treatment, she developed other problems and underwent multiple surgeries. She spent most of her childhood at University Medical Center in Tucson, AZ.

Kristie attended Morenci High School, she was a cheerleader and played the flute in the Morenci Pride Band. It was that year both kidneys were removed, she then went on dialysis. Despite this set back, she went on and graduated with the Class of 2010.  This was the highlight of her life; she was very proud to be a Wildcat! She then went on to study online Medical Billing and Coding at Eastern Arizona College. She was also an advocate to help raise Awareness for Childhood Cancer. She was 23 years cancer free.

Kristie was an inspiration to so many people, she was small but fierce. She didn’t want anyone to feel sorry for her, she always said there were people who had it   worse than her.  She enjoyed going to ASU football games, road trips with her bestie Brayana, playing cards with her family and hanging out with her precious dog Moll’ee. She would say she wasn’t small; she was fun size! And that she was. Kristie was so strong and brave she went through more in her young life than most do in a lifetime. She was like a celebrity, we used to tell her she needed security to go anyplace.

Kristie developed an infection in her leg, she was tired, and her little body could not take anymore. We will miss her deeply, but her memory will live on in everyone who knew her, and she will never be forgotten. She entered into eternal rest at the age of 30.

Mass was celebrated Thursday, January 21, 2021, at 10:00 a.m., at the Holy Cross Catholic Church. Committal followed in the Sacred Heart Cemetery.