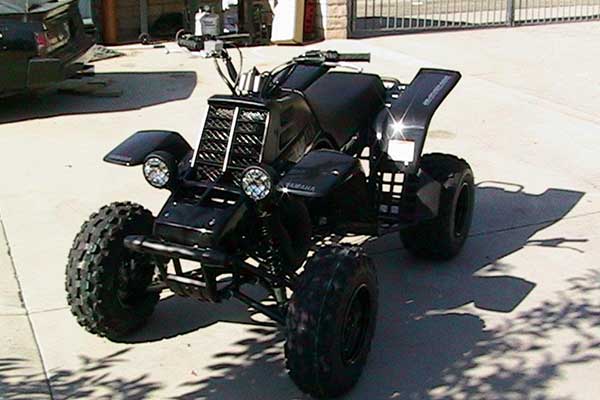 The above image shows the type of vehicle involved, not the actual ATV

SAFFORD – Monday, police responded to a reported theft of an ATV on 15th Street where the victims showed an officer where the ATV had been parked on the front porch, chained to two other ATVs. Skid marks could be seen on the concrete where it appeared the ATV had been dragged out towards 8th Avenue. A chain was also found  near the skid marks that continued down the side of the curb and onto the roadway. The ATV stolen was a 2004 Yamaha Banshee, so it did not require a key and it only had to be kick started.

One of the victims stated they had seen the ATV parked outside around 11:00 p.m. However, after falling asleep, the couple had been woken by hearing footsteps in the gravel outside of their residence. The victims went to check on the noise and discovered the ATV missing. The theft was reported to authorities at approximately 3:00 am.

Authorities checked the streets around the victim’s residence, and then an officer drove to the area of Discovery Park where it is known ATV’s are frequently driven. While the officer was driving on 20th Avenue, he observed vehicle lights on the road that leads to the water tower. The officer drove towards the vehicle and watched as it stopped about 100 yards in front of him. After a few seconds it came about 50 yards closer and then stopped again. The officer got out of the patrol car and motioned for the vehicle to come towards him. It was then that the officer heard the engine rev and come towards him as it gained speed quickly. The officer retreated to the patrol car as the vehicle passed halfway off the roadway. As the vehicle passed by the officer’s car, the under-carriage of the vehicle bottomed out and small plastics flying off from hitting the embankment.

The officer activated his lights and pursued after the vehicle, which by that time had made it to Discovery Park Boulevard and was traveling at a high rate of speed. While behind the vehicle, the officer was traveling at 90 miles per hour and was still not gaining any distance on the vehicle. As the officer made it to the hill at Island Circle, he watched the vehicle skidding sideways and attempting to make a left turn onto Golf Course Road. Sparks under coming from the driver’s side front tire. The vehicle came to a stop just West of the stop sign at Golf Course and 20th Avenue. Due to heavy smoke, the officer could only see two people about 10 yards from the vehicle as they both jumped the fence to the Safford RV Resort. The officer pursued them on foot.

The officer chased one of the subjects through the park, losing sight of the other, until they all ended up at the park exit on the East side. The officer caught one of them at that point, while the other continued running South on 20th Avenue. The subject caught was a 13 year old juvenileand was immediately handcuffed. He agreed to speak with authorities and reportedly told police that the ATV officers were looking for was at his house. The juvenile stated that others had brought it to his house and he didn’t have anything to do with stealing it and that “it wasn’t his fault”. The juvenile continued to state that he was picked up in the vehicle by others who told him that it was their mother’s vehicle. It was also reported that he and another juvenile went on a cruise near the water tower where the driver began driving recklessly and got a flat tire. When the officer had tried to stop them, the juveniles panicked and tried to get away. When the vehicle came to a stop due to a flat tire, they ran.

The officer who had been in pursuit of the vehicle on Discovery Park was informed that it was a stolen vehicle also. It was towed from the scene. The stolen Yamaha Banshee was located on 10th Street where two males were standing next to it. As officers approached, one of the males ran.  Police spoke with the woman at the residence and asked her if anyone ran inside. She stated  “no” and gave permission for authorities to search the residence but they did not locate anyone. Police spoke with the juvenile who kept changing his story about what happened.

As of the report, both stolen vehicles have been recovered and two juveniles were arrested and booked into the Juvenile detention center.