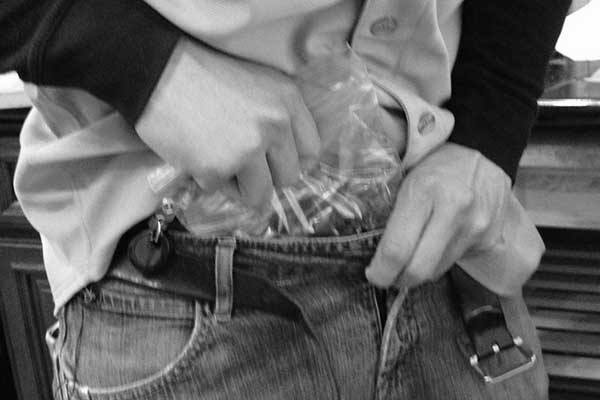 SAFFORD – Early last Friday morning around 8:00 am, an officer was dispatched to Walmart due to a juvenile shoplifter who had fled on foot. The juvenile’s description was given to authorities along with the direction he had run, which was towards the Stone Willow neighborhood near Safford High School. After contacting the student resource officer and figuring out the name of the student along with the father’s name, a photograph of the student was sent over to the officer who was speaking with the Walmart manager, who then confirmed it was the same juvenile shoplifter.

The juvenile had reportedly been seen in the store taking a bottle of alcohol and putting it into his waistband before concealing it under his jacket. Another employee then saw the juvenile conceal another item and then begin walking quickly towards the auto section doors. The juvenile was stopped and asked to hand over the 750 ml bottle of Captain Morgan Rum, valued at $11.97. Knowing that the young man had taken something else a store employee asked him to open his jacket. Instead of complying with the request, the juvenile took off running.

Surveillance footage showed the juvenile walking quickly through the store and exiting the building from the auto section on the south side. He’s seen handing the bottle of rum to the store employee, then running southeast toward the high school. Earlier video footage showed the alleged shoplifter enter the store with another juvenile.

Other surveillance video obtained by authorities showed the alleged shoplifter running east in the Stone Willow neighborhood. He then stopped and changed his clothes into a black jacket and removed his hat. The juvenile then met back up with friends asking them to hide his backpack because it had alcohol in it. It is not known what he did with the backpack before leaving campus. The juvenile did not show back up on high school property that day. Authorities attempted to be contact the boy’s father, however, the number had been disconnected.