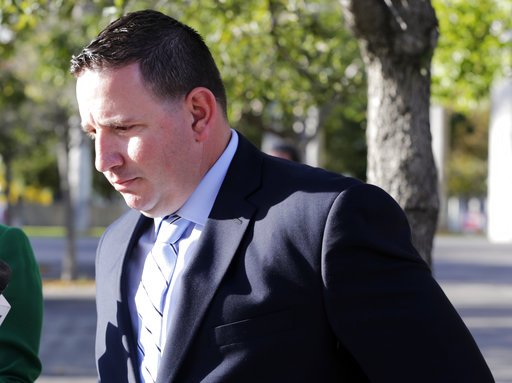 MIAMI (AP) — A Miami jury on Wednesday convicted a Florida sports agent and a baseball trainer on charges they smuggled Cuban baseball players to the U.S. in search of big profits from professional free agent contracts.

The verdict came after jurors heard about six weeks of testimony in the trial of Bartolo Hernandez and Julio Estrada, who were indicted on conspiracy and alien smuggling charges for an operation that began in 2009 and involved a number of high-profile Major League Baseball players.

The jury deliberated only about five hours before the verdict. Prosecutors said Hernandez faces between three and 15 years in prison and Estrada — convicted of more smuggling counts — faces between five and 35 years behind bars.

They also face forfeiture of more than $15.5 million, plus real estate, four Mercedes-Benz vehicles and contents of bank accounts.

U.S. District Judge Kathleen Williams set sentencing for July 11 and will allow both men to remain free on bail. Defense attorneys promised there would be appeals.

Trial evidence showed an existing Cuban smuggling operation that brought people from the communist-run island to Mexico became the platform in 2009 for the much more lucrative trade in elite ballplayers. People involved in that operation testified it was ultimately overseen by Hernandez and Estrada.

The players would be whisked from Cuba to Mexico or Haiti in a speedboat, sign papers claiming residency in their new country and eventually be cleared to sign with MLB teams. Prosecutors showed jurors how many of those documents contained false information, such as made-up jobs for players, and some travel documents were forged.

In one of the trial’s memorable moments, Chicago White Sox star Jose Abreu testified that he ate a piece of his phony Haitian passport while flying to the U.S. in 2013 because he feared repercussions if he landed in Miami with a fake document. Abreu soon after signed a $68 million deal with Chicago.

“Little by little, I swallowed that first page of the passport,” Abreu testified. “I could not arrive in the United States with a false passport.”

Testimony also showed there was competition in Mexico for custody of the players involving criminal organizations. Seattle Mariners outfielder Leonys Martin told jurors about an attempt to kidnap him in which men who claimed to be armed broke into his apartment with a crowbar. Martin eventually walked across the U.S. border at Laredo, Texas, and signed a $15.5 million contract with the Texas Rangers, who later traded him.

“My life was in danger in Mexico,” Martin testified about why he decided to cross the border without travel papers. “I was afraid that I would be kidnapped.”

Another player, Reinier Roibal, testified about witnessing an armed confrontation at a Mexican boatyard between one of the smuggling ring’s original leaders, Joan “Nacho” Garcia, and a group of men. Roibal said he heard gunshots and Garcia, who prosecutors called “the chief thug of Cancun,” was never heard from again.

In each case, the players were required to sign contracts agreeing to pay Estrada and his organization about a third of whatever they made with U.S. teams, with Hernandez getting 5 percent to represent them in negotiations with teams. Abreu, for example, said he paid Estrada more than $7 million after signing his White Sox contract.

Neither Hernandez nor Estrada testified in their own defense. Under cross-examination by their lawyers, many of the players said they decided to take illegal actions on their own and were not directed to do so by either man. They often claimed they were unaware of what was on residency or travel documents they were signing, and were simply eager to get to the U.S. and play ball.

Miami Marlins shortstop Adeiny Hechavarria, who signed a $10 million contract, said he did as he was told so he could avoid being returned to Cuba.

The defense attorneys told jurors Hernandez and Estrada ran legitimate businesses and were not overseeing an illegal smuggling ring. They provided the Cuban players with training, food and lodging and helped them navigate the complexities of becoming cleared to play in the U.S. despite the economic embargo against Cuba.

Hernandez, attorney Jeffrey Marcus said, “knew they were smuggled out. He knew there were criminal organizations involved. He did not have first-hand knowledge.”