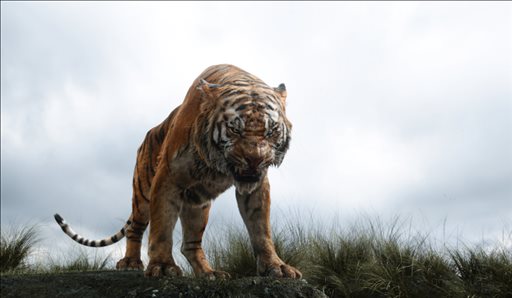 In this image released by Disney, Shere Khan the tiger, voiced by Idris Elba, appears in a scene from, "The Jungle Book." (Disney via AP)

NEW YORK (AP) — The Walt Disney Co.’s “The Jungle Book” opened with $103.6 million in North America, making it one of the biggest April debuts ever at the box office and continuing the studio’s streak of unearthing live-action riches buried in its animated classics.

Jon Favreau’s update of Disney’s 1967 animated version of Rudyard Kipling’s book tells the tale of Mowgli with computer-generated imagery and big-screen bombast. A sizable 42 percent of the film’s domestic sales came from 3-D and premium-format screens.

“The Jungle Book” is just the latest of Disney’s string of live-action remakes of classic cartoons (“Cinderella,” ”Alice in Wonderland,” ”Maleficent”), most of which have fared well at the box office. More plundering of the Disney library is in the works: “Cruella De Ville” and “Peter Pan” are in development; “Beauty and the Beast” is scheduled for next March.

“There’s some consistency that’s happened here in the last few years as we’ve really made this a priority and a strategy from a company perspective,” said Disney distribution head Dave Hollis, who credited production president Sean Bailey with overseeing the live-action adaptations. “He’s been able to do it in a way that really makes them contemporary and, certainly in this case, fully utilizes available technology.

“We’ve got a lot more of these stories to tell.”

“The Jungle Book,” made for about $175 million, was propelled by glowing reviews from critics. It ranks as the second biggest April opening ever, behind only “Furious 7’s” $147.2 million debut.

It also took in an estimated $136.1 million overseas that includes $20.1 million so far in India where it’s the third-highest grossing Hollywood release after 10 days. Ahead of the film’s big opening, Warner Bros. – sensing stiff competition – pushed the release of its own “Jungle Book” a year to October 2018.

Paul Dergarabedian, senior media analyst for comScore, said that the live-action remakes are proving to be another substantial engine for Disney, along with its franchise-building assets in Marvel, Pixar and Lucasfilm.

“To have this incredible vault of content that they can go back to and reimagine, retool and recreate for today’s audiences just gives them a depth and breadth of films that is almost unparalleled,” Dergarabedian said. “Disney has this knack for taking something that’s very old and making it new again.”

Opening in second place was Ice Cube’s “Barbershop: The Next Cut” with $20.2 million. The fourth film in the comedy series (which included the 2005 spinoff “Beauty Shop”) failed to match the $24.2 million debut of the previous “Barber Shop 2: Back in Business” in 2004, but it still supplied a solid opening for New Line and MGM.

The Kevin Costner action thriller “Criminal,” however, opened with a mere $5.9 million for Lionsgate. It cost around $30 million to make.

The Melissa McCarthy comedy “The Boss,” the number 1 film last weekend, dropped steeply. It slid 57 percent with $10.2 million in its second week, landing in third place.