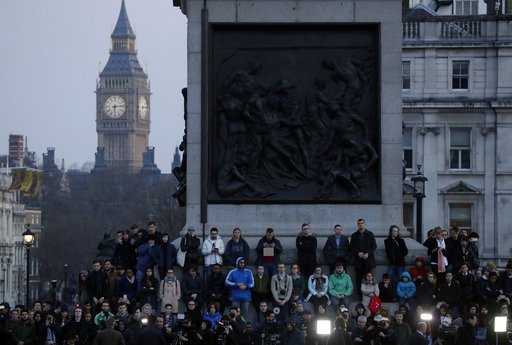 People observe a minutes silence at a vigil for the victims of Wednesday's attack, at Trafalgar Square in London, Thursday, March 23, 2017. The Islamic State group has claimed responsibility for an attack by a man who plowed an SUV into pedestrians and then stabbed a police officer to death on the grounds of Britain's Parliament. Mayor Sadiq Khan called for Londoners to attend a candlelit vigil at Trafalgar Square on Thursday evening in solidarity with the victims and their families and to show that London remains united. (AP Photo/Matt Dunham)

LONDON (AP) — Authorities on Thursday identified a 52-year-old Briton as the man who mowed down pedestrians and stabbed a policeman to death outside Parliament, saying he had a long criminal record and once was investigated for extremism — but was not currently on a terrorism watch list.

As lawmakers returned to work a day after the rampage killed three people and injured at least 30, British Prime Minister Theresa May vowed: “We are not afraid.”

“Today we meet as normal — as generations have done before us, and as future generations will continue to do,” she said to cheers in the House of Commons. 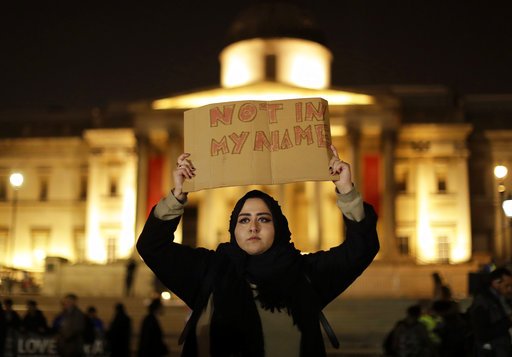 A woman holds up a sign at a vigil for the victims of Wednesday’s attack, at Trafalgar Square in London, Thursday, March 23, 2017. The Islamic State group has claimed responsibility for an attack by a man who plowed an SUV into pedestrians and then stabbed a police officer to death on the grounds of Britain’s Parliament. Mayor Sadiq Khan called for Londoners to attend a candlelit vigil at Trafalgar Square on Thursday evening in solidarity with the victims and their families and to show that London remains united. (AP Photo/Matt Dunham)

The Islamic State group claimed responsibility for Wednesday’s attack, which police said was carried out by Khalid Masood, a U.K.-born resident of the West Midlands in central England. Masood plowed a rented SUV into pedestrians on London’s Westminster Bridge, killing an American man and a British woman and injuring more than 30 people of almost a dozen nationalities.

He fatally stabbed a policeman inside the gates of Parliament before being shot to death by an armed officer.

Vincenzo Mangiacarpe, an Italian boxer visiting Parliament, said he saw the attacker get out of the car wielding two knives.

“You can imagine if someone was playing a drum on your back with two knives — he gave him around 10 stabs in the back, then he left the policeman and he came toward us,” Mangiacarpe said.

The dead were identified as Kurt Cochran, 54, of Utah and British school administrator Aysha Frade, 43 — both struck on the bridge — and 48-year-old Constable Keith Palmer, a 15-year veteran of the Metropolitan Police.

Police arrested eight people — three women and five men — on suspicion of preparing terrorist acts as authorities sought Masood’s motive and possible support network. One arrest was in London, while the others were in the West Midlands city of Birmingham. Police said they were searching properties in Birmingham, London and Wales.

He “was not the subject of any current investigations and there was no prior intelligence about his intent to mount a terrorist attack,” police added.

Many suspects in British terrorist attacks and plots have had roots in Birmingham, England’s second-largest city, and several local mosques have been linked to extremist clerics. 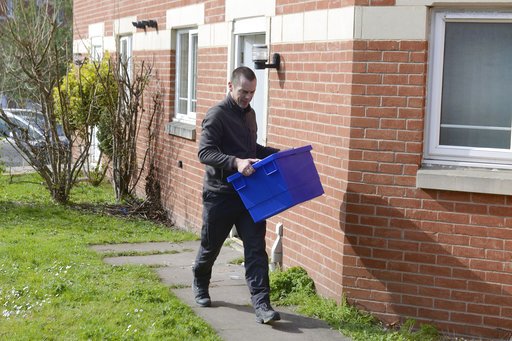 Police activity at an address in Winson Green, Birmingham, England, Thursday, March 23, 2017. Seven people were arrested and six addresses raided in London, Birmingham and elsewhere in connection with the terror attack at the Houses of Parliament. (Joe Giddens/PA via AP)

A home raided in Birmingham was one where Masood lived until late last year, a neighbor said. Shown a photo of him, Iwona Romek said “that is 100 percent” the man who lived next door to her for about five months.

Romek said he had a wife and child of about 6, and would walk the child to school. He rarely left in the evening.

“He seemed like a normal family man who liked to take care of his garden,” she said. But one day she saw him packing their belongings in a black van he bought to replace a red Fiat, and then they were gone.

As police investigated, Parliament got back to business, opening the day with a minute’s silence for the victims.

May set the tone in the House of Commons, saluting the heroism of police and the ordinary actions of everyone who went about their lives in the aftermath.

“As I speak, millions will be boarding trains and airplanes to travel to London and to see for themselves the greatest city on Earth,” she said. “It is in these actions — millions of acts of normality — that we find the best response to terrorism. A response that denies our enemies their victory, that refuses to let them win.”

In 1,000-year-old Westminster Hall, the oldest part of Parliament’s buildings, politicians, journalists and parliamentary staff lined up to sign a book of condolences. One uniformed policeman wrote: “Keith, my friend, will miss you.”

The rampage was the first deadly incident at Parliament since 1979, when Conservative lawmaker Airey Neave was killed in a car bombing by Irish militants.

Some parliamentarians said they were shaken by Wednesday’s attack, and all were somber. But they also were determined.

“There is no such thing as 100 percent security,” said Menzies Campbell, a member of the House of Lords. “We have to learn to live with that.”

The attack echoed deadly vehicle rampages in Nice, France, and Berlin last year that were claimed by the Islamic State group.

IS said through its Aamaq News Agency that the London attacker — whom it did not name — was “a soldier of the Islamic State” who “carried out the operation in response to calls for targeting citizens of the coalition” fighting IS in Syria and Iraq. 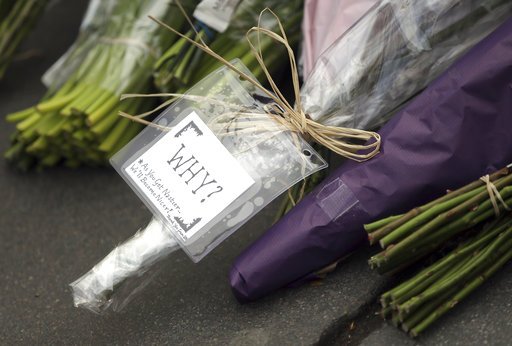 Floral tributes to the victims of Wednesday’s attack, are placed near the Houses of Parliament in London, Thursday March 23, 2017. On Wednesday a knife-wielding man went on a deadly rampage, first driving a car into pedestrians then stabbing a police officer to death before being fatally shot by police within Parliament’s grounds in London. (AP Photo/Tim Ireland)

IS has been responsible for violence around the globe and has called for Western followers to carry out bloodshed in their own countries, although the group has also claimed events later found to have no clear links to it.

Police believe the attacker acted alone, May told lawmakers, with no reason to believe “imminent further attacks” are planned. Britain’s threat level from terrorism stands at “severe,” the second-highest on a five-point scale, meaning an attack is highly likely.

Years ago, Khalid was “investigated in relation to concerns about violent extremism,” she said, but called him “a peripheral figure.”

Home Secretary Amber Rudd denied there had been an intelligence failure because the attacker had been known to police.

“I think that would be absolutely the wrong judgment to make,” Rudd told the BBC. “I’m confident that as we get more information … that we will learn more and take comfort from the information that we have and the work that the intelligence services do.”

British security forces say they have foiled 13 plots in the past four years. There are thousands of extremists in the U.K. who are known to officials, but only a fraction are under surveillance, according to a security official who spoke on condition of anonymity because he was not authorized to talk about ongoing security operations. It takes dozens of officers to watch just one suspect.

London has been a terrorism target many times. Last weekend, hundreds of police simulated a “marauding” attack on a tourist boat on the River Thames.

Metropolitan Police counterterrorism chief Mark Rowley revised Wednesday’s death toll from five to four, including the attacker. He said 29 people were hospitalized, seven in critical condition, and there were a number of “walking wounded.”

The victims were from 11 countries, May said. They included 12 Britons, three French, two Romanians, four South Koreans, one German, one Pole, two Irish, one Chinese, one Italian, one American and two Greeks.

Cochran, who was visiting London with his wife, Melissa, for their 25th anniversary, was listed among the dead by the Church of Jesus Christ of Latter-day Saints. His wife was seriously injured and hospitalized.

Nigel Farage, former leader of the right-wing U.K. Independence Party, blamed the attack on “multiculturalism,” which he said “leads to divided communities.”

But most politicians said the violence should not divide Britain, and May called the rampage “a perversion of a great faith.”

As dusk fell, another silent vigil was held by several thousand people in Trafalgar Square, where the bongs of Big Ben could be heard in the distance.

“Those evil and tortured individuals who try to destroy our shared way of life will never succeed,” Mayor Sadiq Khan told the crowd.

Sughra Ahmed, a Muslim who traveled from northwest England for the vigil, said she’d been reduced to tears on the square by a woman who embraced her.

“Britain is one,” she said. “An attack on one is an attack on us all.”