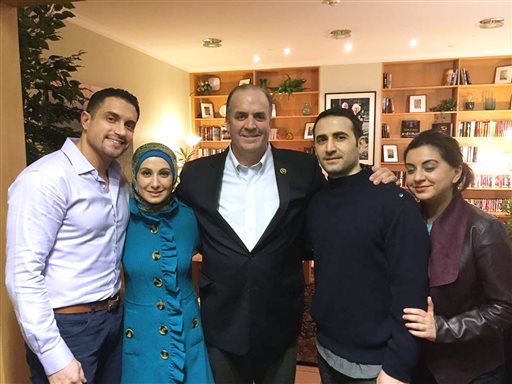 LANDSTUHL, Germany (AP) — Pale but smiling, former U.S. Marine Amir Hekmati recounted Tuesday how disbelief turned to joy when he and three fellow Americans realized that they were being released as part of a deal with Iran and reunited with their families after spending years in Iranian prison.

Speaking publicly for the first time since being allowed to leave Iran in a prisoner swap Sunday, Hekmati said the sudden end to his four-year ordeal still seemed surreal. Convicted by an Iranian court of spying and sentenced to death in 2012, he was later given a 10-year sentence on a lesser charge after a retrial.

“I was at a point where I had just sort of accepted the fact that I was going to be spending 10 years in prison, so this was a surprise and I just feel truly blessed to see my government do so much for me and the other Americans,” Hekmati told reporters outside the U.S. military’s Landstuhl Regional Medical Center in Germany, where he was taken for treatment.

There was no advance warning of his release, he added. “They just came one morning and said ‘pack your things.'”

“I was worried that maybe the Iranian side was going to make new demands at the last minute or that the deal wasn’t going to work out, so up until the last second we were all worried and concerned,” he said.

The 32-year-old says he and his fellow prisoners endured repeated delays until they were allowed to board a Swiss government plane. But they weren’t able to relax until the jet had left Iranian airspace, after which “champagne bottles were popped” and veal and chocolates were served, he said.

Hekmati said he felt lucky and humbled by the support he received from those campaigning for his release. He expressed gratitude to President Barack Obama, U.S. Congress and his other supporters, reserving special thanks for the U.S. Marine Corps.

Asked about his 4 1/2 -years in Iranian prison, Hekmati said “it wasn’t good,” but that his Marine training helped sustain him.

“I tried my best to keep my head up and withstand all the pressures that were put on me, some of them were very inhumane and unjust,” he said. “Hearing about some of my fellow Marines supporting me really gave me the strength to put up with over four years of some very difficult times.”

“He has not had much of a chance to exercise and he’s lost some weight but he looks fit and I think he is on the mend,” U.S. Rep. Dan Kildee, a Democrat from Hekmati’s home state of Michigan, earlier told The Associated Press.

“A better diet and a chance to exercise… and I think he’ll turn out to be just fine.”

Hekmati, Washington Post reporter Jason Rezaian and pastor Saeed Abedini arrived late Sunday at Landstuhl for treatment. A fourth American released in exchange for the U.S. pardoning or dropping charges against seven Iranians opted to stay in Iran, and a fifth American was released separately.

Rep. Jaret Huffman, a Democrat representing Rezaian’s home district in California was also visiting Landstuhl. He said there were “tears, and smiles and hugs” when the family was reunited.

“He continues to be in great spirits, his health is sound, he’s going through a process and it’s going to take a few more days, but Jason’s on track to get his life back,” Huffman said.

Kildee said he had a steak dinner Monday night with Hekmati as well as Hekmati’s two sisters and brother, and that he seemed in “pretty good spirits” for someone who had been incarcerated for so long.

“We talked a bit about his experience, but I think he was just appreciating his freedom and trying to enjoy it as much as he could,” Kildee said.

Hekmati was detained in August 2011 on espionage charges. He says he went to Iran to visit family and spend time with his ailing grandmother. After his arrest, family members say they were told to keep the matter quiet.

Hekmati was born in Arizona and raised in Michigan. His family is in the Flint area. He and his family deny any wrongdoing, and say his imprisonment included physical and mental torture and long periods of solitary confinement in a tiny cell.

Kildee said he looked forward to talking more with Hekmati about his experience in the coming months but did already learn some details.

“We talked about a few of the aspects of his incarceration, (he) described the prison conditions as being bleak as we know them to be by reputation, described the fact that he had been told he was going to be released on several occasions, so even when this moment came he wasn’t sure it was really true until he was at the airport,” he said.

“In some ways that was another way to sort of provide psychological torture — to continue to torment him with his release.”

Huffman said Rezaian had told him his captivity was “horrific” with occasional “comedic moments,” but that he didn’t want to go into further details.

“It’s Jason’s story and I think the world wants to hear directly from him,” Huffman said. “But what amazed me about my time with him last night is his spirit — if the Republican Guard thought they’d break the spirit of this guy, they failed miserably.”

Hekmati said that he’s looking forward to getting home soon.

“I really want to see my family and be back in the land of the free, back home.”

David Rising reported from Berlin. David Runk in Detroit and Frank Jordans in Berlin contributed to this story.