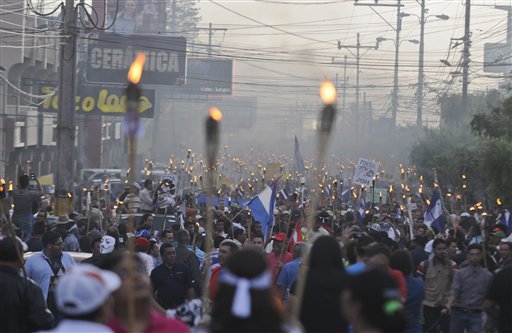 FILE - In this Friday, June 19, 2015 file photo, protesters march to the Attorney General's office to demand the resignation of Honduras' President Juan Orlando Hernandez in Tegucigalpa, Honduras. Honduras and the Organization of American States have approved on Tuesday, Jan. 19, 2016 a new legal team of international investigators, prosecutors and judges to fight corruption. The mission mirrors a team set up in Guatemala with the help of the U.N. that since 2007 has investigated key cases, including a customs kick-back scheme that put the former president and vice president in jail. (AP Photo/Fernando Antonio, File)

TEGUCIGALPA, Honduras (AP) — Honduras and the Organization of American States on Tuesday approved a new international team of experts to help its legal system fight corruption in the Central American country.

President Juan Orlando Hernandez called the agreement signed in Washington a “historic” mission for a country that is controlled in many areas by gangs and has suffered massive government corruption scandals like its neighbor, Guatemala. Until recently, Honduras had one of the highest murder rates in the world, and the vast majority of crimes still go unprosecuted.

“This support mission responds to the legitimate demands of the Honduran people for vigorous and meaningful action against corruption, including criminal investigations and prosecutions of those who offer or receive illegal inducements,” U.S. State Department spokesman John Kirby told reporters.

The Support Mission Against Corruption and Impunity in Honduras will be made up of international judges, prosecutors and legal experts who will work with a specially selected group of Honduran professionals to investigate cases of corruption. The group will begin work in February and has a mandate of four years and $32 million from the regional organization.

It was spurred by massive marches beginning last May with protesters demanding accountability and an independent prosecution team like the International Commission Against Impunity in Guatemala. That team, set up with the backing of the United Nations in 2007, has investigated key cases despite a weak judicial system, including a customs kick-back scheme that put the former Guatemalan president and vice president in jail.

Honduras is suffering a similar public scandal with the embezzlement of $300 million from its social security system. Businessmen and politicians have been implicated in the case, and even Hernandez acknowledged receiving funds for his 2013 presidential campaign from the embezzlement.

The protest group says the social security scandal should be the new team’s first case. But they are concerned the new mission won’t have enough teeth. The Guatemala commission operates in concert with but completely independent of the prosecutor’s office and judicial system. The Honduran mission will operate under the current prosecutor and Supreme Court, both of which are close to the president.

“That institution achieved the impossible in Guatemala,” said Ariel Varela, leader of the protesters, “and we don’t believe that (the new team) will do the same in Honduras.”

This story corrects name of president to Juan Orlando Hernandez.