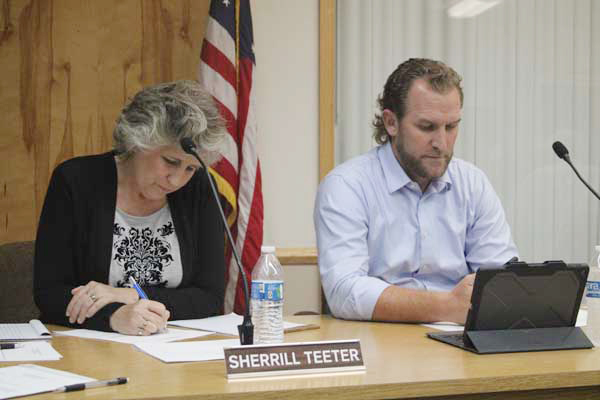 Pima Council members Sherrill Teeter and Lucas Hoopes look over the information supplied about creating a industrial zoning in the town's code, as well as re-zoning an area for a new industrial park. - David Bell Photo/Gila Valley Central

PIMA — With significant growth on the horizon, the Town of Pima is moving forward with establishing an area designated for industrial development.

However, as Councilman Lucas Hoopes explained during last week’s Town Council meeting, the process is not a quick one.

“The first step then is to create the industrial zone . . . so we have to create that in our town code,” Hoopes said. “And then, after that, we have to re-zone this.”

While the town can use the industrial zoning codes of other cities and towns as a boilerplate for new zoning, any change in the town’s code will require multiple public hearings, as will re-zoning of the land once the code has been adopted.

The area designated for industrial development is 20 acres, south of the cemetery and east of the roping arena.

In addition to the need to craft new code, the town also has to decide if the land will be sold or leased, as well as negotiate formal agreements with business owners already located in the area.

The council directed town staff to begin work on drafting the new code’s language and scheduling hearings before the town’s Planning and Zoning Commission.

The Town Council officially welcomed the town’s new manager, when Vernon Batty was sworn into the position during the meeting.

Batty was offered the job following a special meeting Sept. 16. He is a lifelong resident of the town and owner of Jon’s Heating and Cooling in Thatcher.