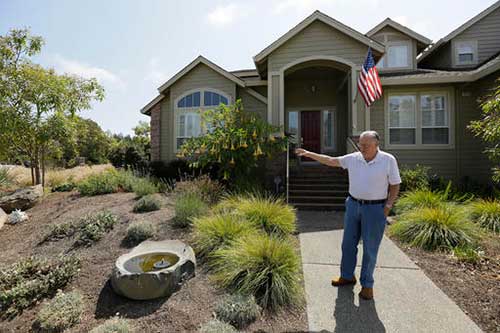 SANTA ROSA, Calif. (AP) — California water agencies that spent more than $350 million in the last two years of drought to pay property owners to rip out water-slurping lawns are now trying to answer whether the nation’s biggest lawn removal experiment was all worth the cost.

Around the state, water experts and water-district employees are employing satellite images, infrared aerial photos, neighborhood drive-bys and complex algorithms to gauge just how much grassy turf was removed. They also want to know whether the fortune in rebates helped turn California tastes lastingly away from emerald-green turf.

“How well did it work? That’s really key when we’re working on historic investments,” said Patrick Atwater, a project manager at the California Data Collaborative, a coalition of utilities and other water-related entities grappling with the question.

Removing lawns may sound like a small, wonky step, compared to building dams. But the green turf in American yards actually stands as a worthy target for water savings, a public enemy in the eyes of many during a drought such as California’s five-year-old one.

In 2015, after a devastatingly dry winter, Gov. Jerry Brown ordered 25-percent water conservation by cities and towns. He mandated $25 million in state-government spending to help cover the costs of low-income California families in particular removing their grass, and putting less-thirsty, climate-suitable plants in their yards instead.

Brown set a goal of eliminating 50 million square feet of lawn. That breaks down to less than two square miles of greenery, out of what the Public Policy Institute of California think-tank has estimated at around 1,000 square miles of watered yards statewide.

But state spending proved a drop in the bucket compared to the money local water districts put into lawn rebates.

MWD doubled its rebate offer to $2 for each square feet of lawn removed, and the lawn rebates quickly became the district’s most popular program ever. Workers processed as much as $10 million in rebate applications a week at peak. In July 2015 alone, Southern Californians applied for rebates to remove the equivalent of 1,665 front lawns.

Water districts revised rebate rules and amounts on the fly, after controversies erupted over golf courses and other properties that got millions of dollars each in rebates. Water boards imposed caps on rebates. Some districts dictated that homeowners put in California-suitable plants. Other water agencies faced criticism for allowing artificial turf, and swathes of gravel.

Now some water-district managers are nervous over political fallout if the benefits don’t measure up to the rebate costs, said Chelsea Minton of OmniEarth, a Virginia-based analytics firm that is using before-and-after satellite images to help tally the effectiveness of the lawn-removal program.

Privately, some worried water officials were “saying, ‘Let’s wait a year or two'” to study it, Minton said

Figuring out whether California’s experiment made sense economically is more involved than just totaling how much turf residents have ripped out.

Two key questions are whether households leave the lawns off for a generation or two, and whether each rebate helps turn Californian tastes away from lawns, independent of future rebates.

At Southern California’s Claremont Graduate University, assistant professor Andrew Marx is drawing on infrared imagery from airplanes, normally used by farmers, to help figure out whether the rebates are changing Californians’ tastes.

The state will go deeper still into the number-crunching, tallying not just water savings but spin-off savings. They range from lower energy costs for piping less water to households to reduced climate-changing pollution from lawn mowers, said Ken Frame, a project manager at California’s Department of Water Resources.

In Southern California’s Irvine Ranch Water District, which spent $638,403 on lawn rebates since 2014, workers sent surveys and drove block to block to nail down just how many homeowners joined the lawn-less trend.

Irvine’s pilot study found that for every three homeowners who took the rebate, at least four others converted their lawns to less water-hungry plants. Water experts say other factors besides the rebates played a part, including news reports about turf removal programs and the governor’s drought-messaging.

Rebates aren’t about trying “to buy up all the turf in California — that wouldn’t be cost-effective,” said Ellen Hanak, director of the water-policy center at the Public Policy Institute of California.

In Santa Rosa, a city of about 170,000 in Northern California wine country, homeowner Trudi Schindler took the rebate to replace deep-green grass with flagstone pavers and a silvery-green groundcover with yellow flowers. Schindler wouldn’t go back to grass.

“It looks beautiful and sophisticated. And just more lovely than a lawn,” she said.