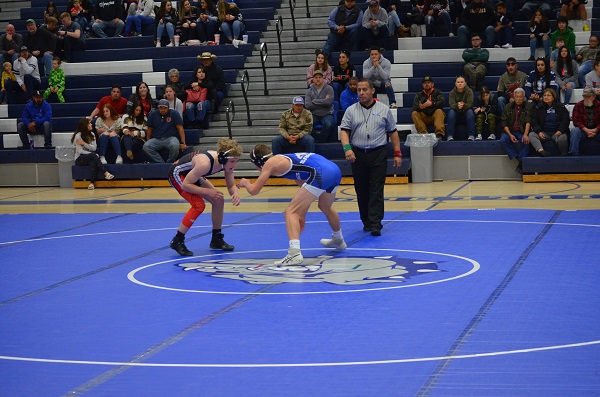 Morenci and and Safford locked up last year. (Photo by Lee Patterson)

GILA VALLEY — The roller coaster of emotions for winter sports athletes in Arizona have run the gamut in the last few months but this week is the official start of the season.

There have already been more cancellations and postponements than most anticipated.

Thatcher basketball had their games on Thursday at Holbrook postponed until February 4th due to COVID-19 protocols with Holbrook. The Thatcher girls squad was suppose to open the season on the road on Wednesday in Globe but the Lady Tigers are quarantined and that game has been cancelled. The boys team will still open the season on Wednesday in Globe.

Thatcher wrestling will host San Manuel on Wednesday to open the season.

The Pima girls are in the same boat with the Globe quarantine. They were scheduled to open the season at home on Tuesday. Instead they will travel to Safford to open against the Lady Bulldogs. The boys team will host Globe on Tuesday with a 5:30pm tip.

Pima wrestling will start their season on Wednesday in St. David.

The Safford boys will open the season at home on Friday night against Snowflake. The girls will take on the Lobos then as well.

Safford boys soccer will open on Thursday at Thatcher. The girls will host Thatcher that same day.

Bulldog wrestling will open on the road Saturday at ALA – Queen Creek.

Fort Thomas boys and girls will open the season on the road on Tuesday at Patagonia before heading to San Simon on Wednesday.

KATO-AM will broadcast as many basketball games as they can this season. The AIA has limited 2 parents per athlete into games and when the capacity is met there will be no more people let in, even to broadcast.