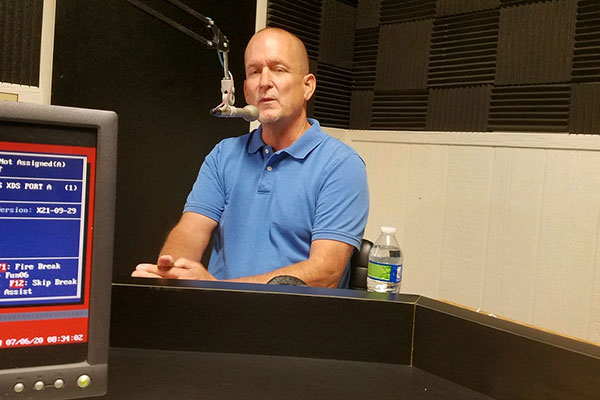 David Bell Photo/Gila Valley Central. Safford City Councilman-elect is shown here during a recent appearance on Voice of the Valley.

SAFFORD — It only took a few hours Wednesday morning to determine who would occupy the final seat open on the Safford City Council.

After the Graham County Elections Department verified and tabulated about 350 early ballots, Brad Hemphill won the seat with 883 votes, edging out Dusti Brantner who received 817.

Given the lack of door-to-door campaigning and access to face-to-face public forums, Hemphill said his council run in 2018 may have given him a slight advantage over the other four challengers in the race.

“I think everybody did the best they could with social media and the signs. I think everybody responded to the (Eastern Arizona) Courier questionnaire and I think everybody appeared on (the Voice of the Valley) show as well, so it was tough to differentiate under the circumstances. So just the face that I was able to get out a little bit more in person in 2018 probably was the difference,” he said.

The Thatcher Town Council had four seats up for election and, with only four candidates running, each won without contest. They are: incumbents Randy Bryce and Ashley Smith, and newcomers Eduardo Carlton and Mark Vining.

It was the same case for the Pima Town Council, with three running for three seats. The winners are: incumbents Sherrill Teeter and Mayor CB Fletcher, and newcomer Lucas Hoopes.