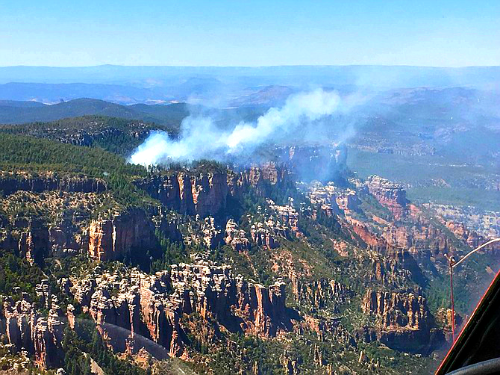 For the local onlooker, if they turned their eyes to the sky on Friday, June 3rd, they would see a grayish haze hanging low over the Gila Valley. This gray haze is smoke coming all the way from the Juniper Fire near Young, Arizona.
The Juniper Fire fire is located in the Tonto Forest. Ten miles south of Young, Arizona, the Juniper Fire is 16% contained at this time. On the morning of June 3rd, there were 416 personal working on the fire. Five hotshot crews were on hand, as well as Type 3, 11, and 6 engines. Multiple fire crews, and many support and command personal are working as well. Helicopters of various types are working together with a small fixed-wing aircraft in the sky, while three dozers are attacking the flames on the ground.
So far, the Juniper Fire is roughly 14,989 acres in size. It was caused by lightning strike. Fire crews had to temporarily shut down state route 288. Crews are attempting to contain the fire, but not extinguish it. The Juniper Fire is expected to grow slowly.