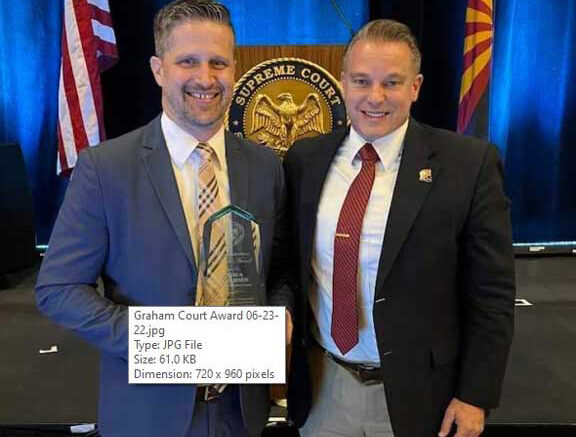 PHOENIX — The good work by the administrator of Graham County courts was recognized by the state Supreme Court.

Court Administrator Josh Halversen, who also serves as chief of Probation, was recently presented the 2022 Administration of Justice Award.

It’s the first win for Graham County in the Supreme Court’s Distinguished Service Awards category, which includes Outstanding Contribution to Arizona Courts, Judge of the Year and Outstanding Pro Bono Service awards in addition to the Administration of Justice Award.

“Thank you, Josh, for your hard work and dedication to our county,” Graham County Superior Court Judge Michael Peterson said on his social media.

The other time Graham County Courts were recognized by the Supreme Court was in 2012, when then-Chief Probation Officer Sandra Figueroa was a co-winner of the 2012 Protecting Children, Families and Communities Award.

Nominations are currently open for the Supreme Court’s next round of Strategic Agenda Awards, which include:

Winners will be announced in October.