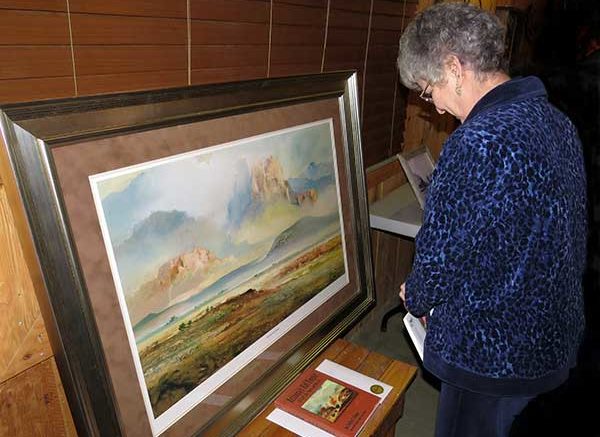 Safford, Ariz.  Now that the Graham County Historical Society has acquired a large metal building to serve as its future museum, members are kicking off a major fundraising effort to finance the building’s construction. To get things started, they are raffling a print of the painting “The Power of Silence” by internationally known local artist Hal Empie.
The large professionally framed print, measuring 3×4 feet in size, was donated by Empie’s daughter, Ann Groves, who manages the Hal Empie Gallery and The Artist’s Daughter in Tubac. “We really appreciate Ann’s generous support and look forward to having a special exhibit featuring her father’s paintings in our new museum,” said GCHS fundraising chair Hal Herbert.
The winner of the raffle will receive a Certificate of Authenticity from the Hal Empie Gallery along with the book “Arizona’s Hal Empie:  His Life, His Times and His Art” by Evelyn S. Cooper with the foreward written by Duncan native, retired Supreme Court Justice Sandra Day O’Connor. The book chronicles Empie’s life in Safford, Solomon, Duncan and Tubac.
This beautiful art is being displayed at venues throughout the valley; it is currently featured at One AZ Credit Union and will be at The Plank after that. It can also be viewed at the upcoming Gila Valley Wine, Art, and History Festival where the raffle drawing is tentatively set for Sunday, April 15.
Individual tickets are $5 or five tickets for $20. Raffle tickets will be available at the Festival and are currently on sale at the Graham County Chamber of Commerce and at the Historical Society Research Library, 424 West Main Street in Safford. They can also be purchased from GCHS Board members who can be contacted directly at phone numbers listed on the Historical Society’s website.
Yes, the GCHS has a brand-new website at www.grahamazhistory.org. It’s still in the developmental stage and will continually improve. Information about the raffle, along with a close-up photo of the Hal Empie print, can be found there.
The new website, along with the existing Facebook page, are also being used to encourage donations during Arizona Gives Day on April 3; donations can be made at any time.