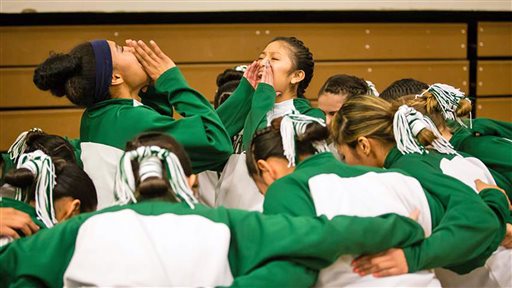 In this Feb. 2, 2016 photo provided by Richard Johnson, the girls basketball team at Flagstaff, Ariz., High School does a cheer with their hair tied back in traditional Navajo buns before taking the floor for pre-game warmups. But before play could begin the referee made them remove the hair ties, saying they were a safety hazard. This sparked sharp criticism from the schools principal and the president of the Navajo Nation. Officials say the hair ties wont be prohibited in the future.(Richard Johnson via AP)

FLAGSTAFF, Ariz. (AP) — The board that governs Arizona high school sports says members of a girls’ basketball team can wear their hair in traditional Navajo buns after a referee’s decision to ban the hairstyle at a game this week caused an outcry.

The Flagstaff High School players were expressing their team pride and Native American cultural might when they pulled their hair into the neat, low buns Tuesday and took to their hometown court. Yarn in the school’s colors — green and white — wound tightly around each bun, cocooning it, and a spray of the colorful pieces dangled from the top.

The girls donned the hairstyle as they warmed up to play Phoenix’s Greenway High School. But before the game started, an official ordered them to remove the buns because of safety concerns. The girls complied.

The call has been sharply criticized online, with some Navajos saying it was an attack on their heritage. School Principal Tony Cullen said he was livid and “will defy the hell out of that” if another referee attempts to make the same call.

Navajo buns are a key part of tribal members’ identity, worn by men and women. Long hair signifies the root of thought, rain, abundance and rejuvenation of life, said Jamescita Peshlakai, a staff assistant in Begaye’s office. When it’s tied up typically with spun sheep’s wool or buckskin, the thoughts and prayers of Navajo people are contained within the bun, called a tsiiyeel in Navajo.

Earlier Tuesday, during the junior-varsity game, Flagstaff High School had a competition to see who in the crowd could wrap hair into a Navajo bun the fastest. A drum group played a traditional song.

The Arizona Interscholastic Association, which governs high school sports, apologized for the referee’s call. It said the official did not mean to insult anyone but acted within his authority and by the rulebook.

Gary Whelchel, the association’s state commissioner of officials, said the rule is a little vague but generally prohibits barrettes with hard surfaces, beads, picks or anything that could be perceived as dangerous.

“In this case, the official who was there looked at them and felt they could possibly be a hazard on the court,” he said. “Another girl could get their hand caught in it.”

The association said it has bolstered training on cultural sensitivity, and the Flagstaff girls will be allowed to wear the Navajo hair buns in future games.

“Those are legal,” Whelchel said. “The official made a judgment that maybe he should have passed on.”

Victor Toehe was on the basketball court with his 12-year-old daughter, who sang the national anthem in Navajo, when the referee made the call. His older daughter, a senior on the basketball team, walked over to him, shaking her head and visibly hurt. He helped her unravel the yarn.

“We were kind of upset about it. But it wasn’t like preparing for a rage or getting really upset,” Toehe said. “Overall, it was a good night, and just one incident overshadowed it.”

The girls plan to wear the buns at a crosstown rivalry game Friday. Flagstaff is just west of the Navajo reservation and has a sizeable Navajo population.