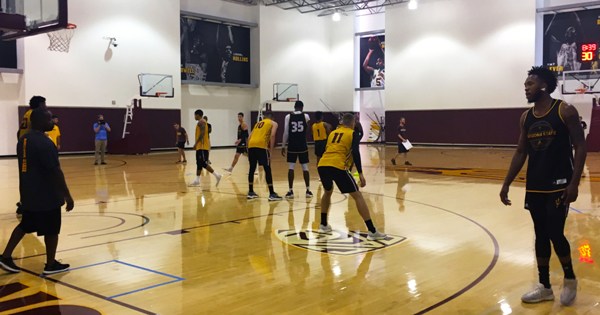 Arizona State works through its offensive sets in the first open practice of the 2018-19 season. Photo by Zach Pekale/Cronkite News

TEMPE — It was a combination of swagger, finesse and three-point shooting that propelled Arizona State to a marquee road victory at Kansas last December. That game at Allen Fieldhouse will be remembered as the moment coach Bobby Hurley put his stamp on the Sun Devils.

It was the game that gave birth to “Guard U.”

Arizona State guards Tra Holder, Shannon Evans II and Kodi Justice, all now playing professionally overseas, combined to score 72 points and led the Sun Devils to a stunning upset. It was only the fifth non-conference loss in 15 seasons that Kansas had experienced at Allen Fieldhouse.

Now, Hurley’s team is ready to establish a new identity as he enters his fourth season at ASU, and it’s one few would have predicted.

Call it “Guarding You.”

With nine players on the roster standing 6-feet-7-inches or taller, the Sun Devils have an abundance of size and athleticism and the team is turning its focus to defense. It is a change that comes a year after ASU ranked 242nd out of 351 Division 1 programs in scoring defense, conceding 74.8 points per game.

Following a 12-0 start to last season, the Sun Devils trudged through Pac-12 Conference play, finishing 8-10 and ending up just inside the NCAA Tournament bubble. On a number of occasions, defensive breakdowns cost the Sun Devils down the stretch of games. Of the teams 12 losses, six were decided by four points or less. That includes a 60-56 first-round NCAA Tournament loss to Syracuse.

“We lost a lot of close games,” Hurley said. “We’ve gotta flip the script on that and be able to close teams out. If you’re really good on defense and you can rebound, then you’re going to get stops late in the game.”

Among the new faces for Hurley this season is Arizona native Zylan Cheatham, a 6-foot-8 forward who is expected to play an integral role defensively for ASU after transferring from San Diego State.

Cheatham, a redshirt senior, possesses the ability to defend multiple positions and could be asked to play out of position. Still, he expressed excitement about anchoring the defense.

“That’s the thing I love about this program,” Cheatham said. “Hurley definitely lets me rock. He lets me display my defensive versatility. I can guard, in my eyes, one through five (point guard through center).”

With De’Quon Lake going out with a minor knee injury, Cheatham has flashed his versatility by guarding a lot more power forwards and centers in workouts.

“Once our team is full and healthy, I’ll play some three, some two, even bring the ball up,” Cheatham said. “In my eyes, you are who you can guard. If you can’t guard a three or a two, you’re definitely not a three or two.”

While the frontcourt appears to be more versatile and dynamic, Hurley has not lost touch with his backcourt roots.

Sophomore guard Remy Martin is expected to move into the starting lineup after earning Co-Pac-12 Sixth Man of the Year honors in his first season and will likely be joined in the backcourt by freshman Luguentz Dort.

Rated a five-star prospect by ESPN.com, Dort flew mostly under the radar during recruiting. But his presence hasn’t been missed since he arrived in Tempe, especially by Hurley.

“When it’s all said and done for me, I don’t know if I’ll coach a better defensive guard than he is,” Hurley said.

With Dort as the centerpiece, Hurley put together the 11th-rated recruiting class in the country, according to 247sports.com. The group has a decidedly international flavor with four-star prospects Elias Valtonen of Finland, Uroš Plavšić of Serbia and El Cajon, California’s Taeshon Cherry joining Dort, a Canadian. They fill out a roster that returns six contributors from an NCAA Tournament team.

For the first time under Hurley, there may not be enough minutes to go around for all of the talented players on the roster.

Hurley thrived on competition as a player, and Martin said the battle for floor time will only make the Sun Devils better.

“The competition level is at an all-time high because, as a competitor you want to win everything,” Martin said. “And we have so many competitors that we get into some battles. It only ups our level of intensity.”