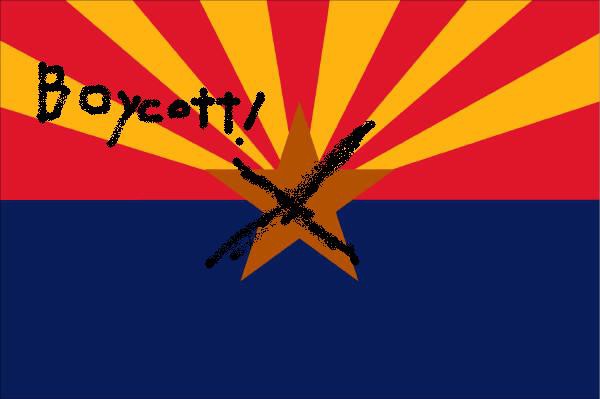 PHOENIX (AP) — Latino and civil rights groups behind a 2010 boycott of Arizona designed to pressure the state into stopping anti-immigrant legislation on Wednesday said they are considering a renewed boycott because of a new series of legislative proposals.

The groups, united as the Somos America Coalition, said more than a half-dozen bills moving in the Arizona Legislature target illegal immigrants and strike fear in the immigrant community.

Founding President Roberto Reveles delivered a letter to Republican Gov. Doug Ducey asking him to pressure the Legislature into killing the bills or to veto them if they reach his desk.

“During the boycott, Arizona’s business community eventually delivered a clear message to the Legislature’s leadership to reject any further anti-Latino and anti-immigrant policies,” Reveles’ letter said. “Regrettably, the legislature is once again promoting extremist public policy shamelessly aimed at making life so miserable for undocumented immigrants that they will self-deport.”

Enacting the new legislation would prompt a destructive boycott, Reveles said. A study done six months after the start of the 2010 boycott showed at least $141 million in lost economic activity, although it didn’t have a massive impact on the state’s economy.

Ducey spokesman Daniel Scarpinato called any boycott “a stunt that should be widely and vocally condemned.”

“Let me be very clear,” he said. “Any discussion of a boycott is election-year politics at its worst and these groups should be ashamed of themselves for trying to divide Arizona and destroy our economy.”

State business groups, including the Arizona Chamber of Commerce and Industry, also rejected calls for a renewed boycott. “Boycotts only hurt our economy, negatively impact hardworking Arizonans and divide our citizens,” the groups said in a joint statement.

The Legislature is considering a series of bills that worry the Latino groups, although many of them have stalled.

Ducey has signed one bill that ends a state prison program that releases some convicts subject to deportation after they serve 50 percent of their sentences instead of the normal 85 percent. Those convicts were then turned over to federal officials for deportation, but lawmakers were concerned some were being released in the U.S.

In a signing letter, the governor said the bill was about holding everyone to the same standard of justice and wasn’t about immigration politics.

The other bills cited by Reveles’ group include ones that would require illegal immigrants to serve their full sentences and deny them probation; target state funding to cities that issue identification cards to people in the country illegally or don’t cooperate with immigration agents; and another barring the state from helping relocate refugees.

Sen. Steve Smith, R-Maricopa, is sponsoring the bill requiring full sentences and says it aims to prevent criminals from being released early and committing more crimes. It was prompted by the 2015 killing of 21-year-old convenience store clerk Grant Ronnebeck by an immigrant released on bond by immigration officials after a state conviction.

“The only thing my bill does is say if you are convicted of a felony, whatever penalty that crime carries, you will serve the whole sentence,” Smith said Wednesday. “Which to me is fair. You tell me what you tell Grant’s family — I’m sorry your son was murdered because it wasn’t politically expedient for us to do anything about it?”

The 2010 boycott came after years of legislation targeting immigration. The signing of Senate Bill 1070 by former Gov. Jan Brewer led to huge protests and the boycott.