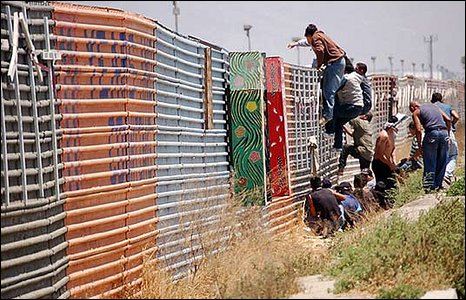 It also raises questions about how agents respond to such incidents and their decisions to not arrest smugglers when they sneak into the country with drugs for what they describe as tactical reasons.

A Mexican journalist who was reporting from Nogales, Arizona, on March 16 captured the men by accident and then followed them as they ran into the U.S., hid behind some bushes and then climbed back into Mexico when they realized they were being filmed. They were wearing large backpacks believed to be filled with drugs.

The journalist, Carolina Rocha of Azteca Noticias in Mexico City, said she was struck by how quickly the men were able to climb the fence. She also was surprised that no agents responded to the incident even though there were three vehicles from the agency parked within yards.

Tucson Sector Assistant Chief Fernando Grijalva says it was a tactical disadvantage for agents to respond because of the danger it would have posed to the reporter, cameraman and others around the area. He said surveillance camera operators in Nogales spotted the men, too, and alerted the agents on scene, who decided against taking action.

Border Patrol video shown to The Associated Press reveals the cameras were watching the men even before they were on the fence. An infrared camera watches the men cross a busy street in Mexico, approach the fence and climb over. It follows them as they head across the border to the Arizona side and then head back to the fence and into Mexico. A second video from a different surveillance camera would not load properly when being shown to the AP. The agency isn’t releasing the videos to the public.

The episode raises questions about why the agents didn’t simply meet the smugglers at the wall and either arrest them or warn them about crossing illegally with drugs. But Grijalva said doing that would have been the wrong tactic.

“We need to dictate these circumstances. By them rushing in to that fence (it) is not a tactical advantage to them, it’s to the advantage of the smugglers,” Grijalva said. “We don’t view it as anyone was right or wrong. We view it as they did what they were supposed to do.”

The video of the smuggling attempt emerged during a heated debate in the presidential race over Republican front-runner Donald Trump’s plan to build a wall to keep immigrants and drugs out of the country.

Grijalva said he couldn’t delve into other details about how agents respond to fence climbers but said they have to take into consideration their surroundings and what the criminal organizations controlling the smugglers may be planning. The agency says it’s common for young smugglers to be used as decoys to distract agents away from bigger loads being smuggled, another factor in whether agents will respond if they spot something.

The agency says it doesn’t track the number of fence climbers. Grijalva said it happens often but couldn’t point to a figure. But Nogales residents say the practice is extremely common, and some have even nicknamed the border climbers “Mexican spidermen” for their ability to climb rapidly.

The fence is made of steel and in some parts is as high as 26 feet. When the fencing was completed in Nogales, it was touted for its efficiency and the difficulty of climbing it.

Grijalva said the fence isn’t supposed to seal the border but rather be another tool agents can use.

The fact that the smugglers climbed the fence while agents were nearby shows that criminal organizations are testing agents and trying to figure out their vulnerabilities, he said.

“All it shows is that the demand for drugs is there, the opportunities are there for people to do it. The more resistance, the more deterrent, obstacles, things that you put along the border, the more creative they will become. And history has shown that’s the way it’s gonna be,” Estrada said.