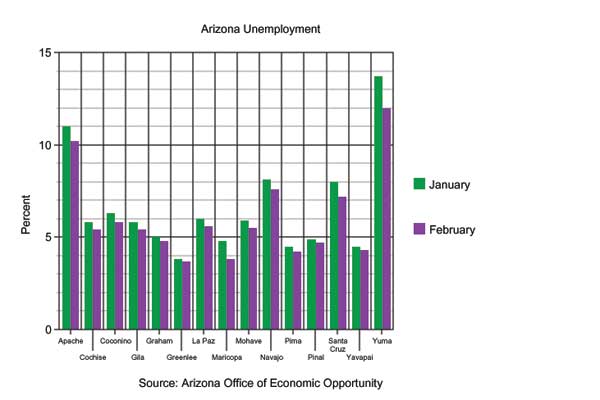 PHOENIX – Rapid changes caused by a pandemic are on full display in the latest unemployment data issued by the Arizona Office of Economic Opportunity.

A total of 127,716 Arizonans filed for unemployment in the month of March, with most of those filings – 117,927 – coming in the final two weeks of the month after Gov. Doug Ducey issued an executive order closing all non-essential businesses and limiting restaurants to drive-through and curb-side service only amid the COVID-19 pandemic.

However, on March 26, the state issued its unemployment report for February, which showed unemployment at 4.5 percent statewide, down four-tenths of a point from the same time last year.

In February, Greenlee County held its place as the county with the lowest unemployment in the state, dropping one-tenth of a point to 3.7 percent. Second lowest is Maricopa County, at 3.8 percent.

Yuma County had the highest unemployment rate in February, at 12 percent, followed by Apache County at 10.2 percent.