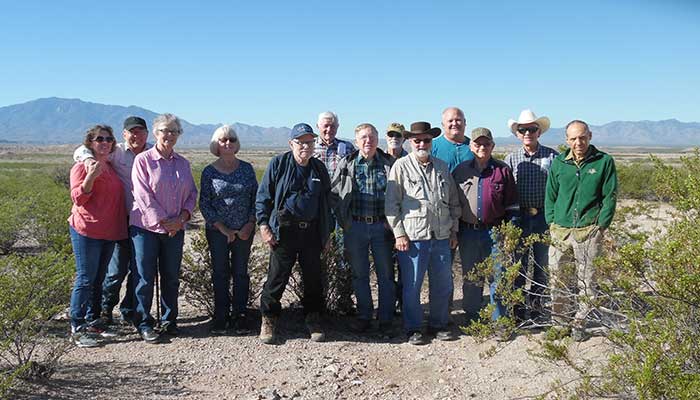 Safford, AZ – On Saturday, November 10, the Graham Country Historical Society (GCHS) will host its annual Fall Symposium from 10:30 a.m. to 1:00 p.m. at the Discovery Park Barn. The program is free and the public is encouraged to attend. “This year’s Symposium will highlight two presentations from Tucson’s Archaeology Southwest,” said GCHS President Mike Crockett. “We’re honored to host these two outstanding archaeologists.”

Linda J. Pierce, Deputy Director of Archaeology Southwest, will discuss the Ray Robinson Collection. Ray Robinson, a local geologist in the 1960s, collected and catalogued artifacts at four different sites in Graham County, donating them to Archaeology Southwest in later years. The artifacts demonstrate the degree to which prehistoric peoples engaged in commerce and trading in the region. Ms. Pierce has done fieldwork in South Dakota, New Mexico, Arizona, and the Republic of Cyprus, and is a former staff member of the Arizona-Sonora Desert Museum.

Dr. Jeffrey J. Clark, Ph.D., Preservation Archaeologist at Archaeology Southwest, has worked extensively in Israel, Syrian and Iraq, as well as southern Arizona and southwestern New Mexico. Dr. Clark helps direct his organization’s field school on the Upper Gila, and has recently focused on the scale and impact of “macro-regional” social networks and human migration. His topic will be “Cultural Integration in the 1200-1300s.”

A light luncheon and various reports from GCHS board members will follow the presentations. Annual membership dues are $25. For further information, contact Crockett at (928)792-8516.

The GCHS hosts educational presentations and treks throughout the year. The most recent was on Saturday, October 27, when 13 members and friends followed the Bigler “Seven-Mile Ditch” to Sunny Flat. After meeting in Pima, the group truck-trekked to the origin of the ditch on the Union Canal Extension, visited the sites of the flume across Paterson Wash and the tunnel through the ridge east of Sunny Flat, and concluded at the old farm site approximately five miles west of Pima. All agreed the story of the Ditch was one of clever engineering, incredibly hard work, and ultimately, monumental disappointment. 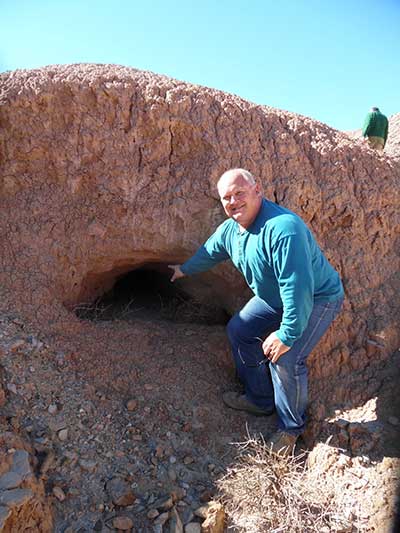 Paul David shows where the Seven-Mile Ditch tunneled under a clay hill.