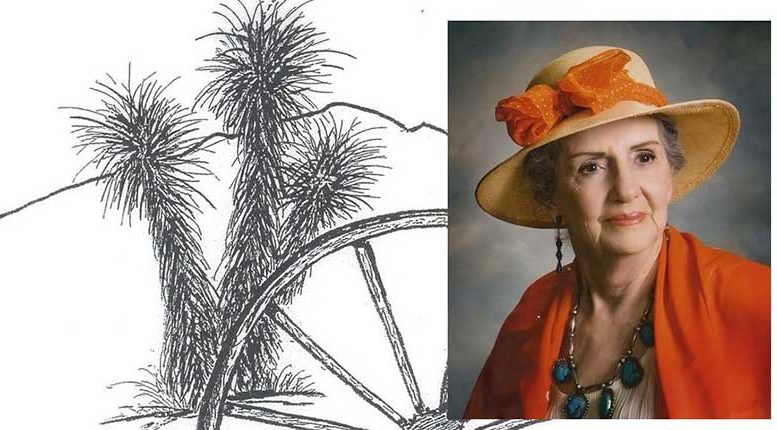 The Graham County Historical Society (GCHS) will recognize the lifelong contributions of Helen Ruth Claridge Cole with its 2018 Heritage Award.

Safford, Ariz.  The Graham County Historical Society (GCHS) will recognize the lifelong contributions of Helen Ruth Claridge Cole with its 2018 Heritage Award. The public is invited to celebrate the presentation of the award on January 27, 2018, at Eastern Arizona College’s (EAC) Discovery Park barn. The ceremony and GCHS Annual Meeting will begin at 10 a.m. and conclude at noon, and will include refreshments and musical entertainment.

“Our Board voted unanimously to honor Helen with this year’s Heritage Award,” said GCHS president Chris Gibbs. “Her many contributions to the Gila Valley, especially in preserving its history, are outstanding.”

Helen has led a unique life with diverse career paths that have included author, artist, radio broadcaster, seamstress, and much more. She has the somewhat rare distinction of living her entire life in the Gila Valley, born in 1930 in a little white house on West Relation Street.

One of her first jobs at the tender age of 12 was working for her uncle, Stan Crandall, at the Crandall’s Pharmacy soda fountain on Main Street in Safford. She later worked at The People’s Department Store and, while attending Brigham Young University, for J.C. Penney’s in Provo.

She majored in home economics, working as a seamstress from 1951 to 1958. Her a minor in art eventually led her to a later career as an artist who has created more than 500 paintings known for their distinctive bright colors.

Twenty-year-old Helen, the daughter of Monroe Claridge and Lucille Wilkins Claridge, married Billy Van Cole on February 9, 1951, and the happy couple had three children – Jeff, Jennifer and Julie. Their family grew over the years and now includes 18 grandchildren and more than 50 great-grandchildren (with one on the way) and one great-great-grandchild.

In 1958, Helen began work as a bookkeeper for radio station KGLU in Safford, also working for stations in Winslow, Globe, Coolidge and Clifton. She assisted Bill – the Voice of the Bulldogs – in broadcasting sports in the Gila Valley for 22 years.

Broadcasting soon became a major focus, with Helen eventually hosting her own program, “Helen’s Lady Fair.” Unfortunately, in 1960, the Federal Communications Commission (FCC) announced that five radio stations owned and operated by the Gila Broadcasting Company would leave the air for an indefinite period due to prior violations. KGLU, which had broadcast since 1938, was one of them. Helen, an FCC-licensed broadcaster, was chosen to broadcast the last two hours that the station would be on the air on October 29, 1960. She played “Finlandia” as the final song to end KGLU’s 22 years of broadcasting.

In 1961, she purchased and operated Cole’s Office Supply in Safford, with a small extension in Thatcher, for six years. After moving from Safford to Thatcher in 1964, she was very engaged in her children’s church and school lives to the point that she was selected by the Thatcher High School student body as the Most Loyal Parent two years in a row. In her elusive free time, she began working with her father Monroe in 1968, then later with husband Bill, in the operation of the Chevron Bulk Plant.

Helen began her art career in 1975 at the advice of her doctor, who recommended painting as a form of therapy. Largely self-taught, she was lucky enough to take a one-week class from nationally known local artist Hal Empie. She has produced more than 500 paintings which now hang in homes, businesses, churches, and museums in Arizona, New Mexico, Utah, and California.

Beyond painting, she has created numerous cross-stitch pieces and shared her talent for crochet work in altar covers for Latter Day Saints temples in the Gila Valley and other temples in Arizona, Hawaii, and Nauvoo, Illinois. In 2006, Helen joined the Art Guild of Eastern Arizona (AGEA) and offered them a building, naming it The Little Art Gallery and donating it to AGEA in 2009.

She also shared time with her Church. Bill and Helen served 18 months in the Tallahassee Mission in Florida and 2½ years as ordinance workers in The Church of Jesus Christ of Latter-day Saints’ Arizona Temple in Mesa.

Traveling is also in Helen’s blood. She and Bill enjoyed motorcycle touring between 1979 and 2001, logging more than 250,000 miles in the United States and Canada and allowing Helen to pursue her photography hobby. Her love of art led to excursions to Europe, the Mediterranean, Holy Land, western United States and Canada. She fondly remembers her 57 years with Bill, who passed away in 2008, as the best times of her life.

Always willing to tackle a new project, Helen’s latest endeavor is writing. In 1983, Helen began compiling and publishing town, individual and family histories. The first of these was Thatcher’s centennial book, “One Hundred Years in Thatcher.” She and her brother Jim Claridge completed the book “Eastern Arizona College … College of Many Names” documenting EAC’s history beginning in 1888.

After completing 28 books, Helen blames her lack of exercise due to the thousands of hours spent at her keyboard with her first heart attack in 2006. Now, after three heart attacks, seven stints and two bouts with cancer, Helen is still going strong, just like the Energizer Bunny! Her enthusiasm for art, history, writing, and life, in general, is vibrant.

Helen’s credits her mother Lucille, who was an avid collector of historical facts and events, providing valuable information while she completed research for these books. “Helen’s publications have preserved and shared information about the Gila Valley that otherwise might have been lost,” commented Danny Haralson, historian for the GCHS. She has also shared her vast historical knowledge through various talks and presentations. These contributions, along with her life of service to the community, led the Historical Society to honor Helen with the 2018 Heritage Award.

For more information about the Annual Meeting and award presentation, contact GCHS vice president Mike Crockett at 792-8516 or Mike.Crockett@eac.edu.

The Graham County Historical Society is organized exclusively for historical preservation and educational purposes under Section 501c3 of the Internal Revenue Code of 1986, as amended. Charitable contributions are fully tax deductible.