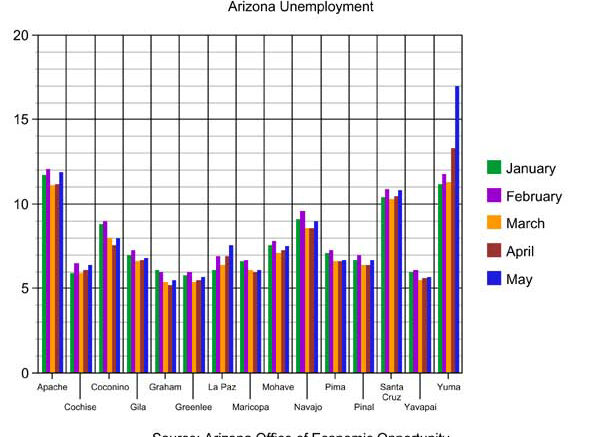 PHOENIX — For the fourth month in a row, Graham County holds the lowest unemployment rate in Arizona.

That’s according to data released Thursday by the Arizona Commerce Authority, which reported Graham County with a 5.7 percent jobless rate in May, an increase of 0.3 points from April.

Statewide, the seasonally-adjusted unemployment rate held steady in May at 6.7 percent, which is 3.9 points lower than the rate of May 2020, when unemployment statewide was 10.6 percent. The national rate decreased 0.3 point to 5.8 percent.

Six economic sectors reported job gains in May: Leisure and hospitality (up 2,200 jobs); trade, transportation and utilities (up 2,000 jobs); manufacturing (up 1,400 jobs); construction (up 1,100 jobs); professional and business services (up 800 jobs); and financial activities (up 500 jobs).

Posting job losses were education and health services (down 800 jobs); while natural resources and mining, and information showed neither job losses or gains.