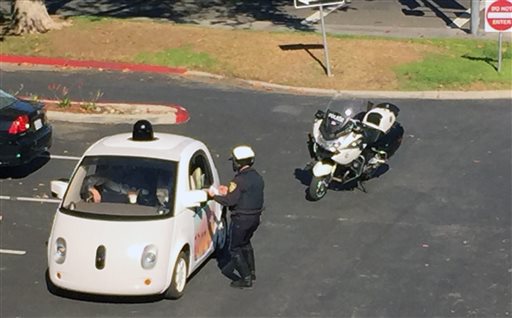 In this Thursday, Nov. 12, 2015 photo provided by Zandr Milewski, a California police officer pulls over a self-driving car specially designed by Google that was being tested on a local road in Mountain View, Calif. The police officer saw the car going a road-clogging 24 mph in a 35 mph zone and realized it was a Google Autonomous Vehicle. After getting closer to it he noticed that there was no one actually driving the car. The officer stopped the car and contacted the person behind the wheel to say the vehicle was impeding traffic, but he didn't give out a citation. (Zandr Milewski via AP)

MOUNTAIN VIEW, Calif. (AP) — A car built by Google that drives itself around city streets had a brush with the law for driving too slowly.

A police officer in the tech giant’s Silicon Valley hometown pulled over the prototype car Thursday because it was going a traffic-tying 24 mph in a 35 mph zone.

The officer spoke with the person in the driver’s seat but issued no citation, according to the Mountain View Police Department. Though the car was driving itself, state law requires a person to be able to intervene when the technology is tested on public roads.

The officer wanted to “learn more about how the car was choosing speeds along certain roadways and to educate the operators about impeding traffic,” according to a department blog post.

The bubble-shaped prototype has two seats. Its top speed is 25 mph.

“Driving too slowly? Bet humans don’t get pulled over for that too often,” Google’s self-driving car project wrote in a blog post. It said the cars — outfitted with high-tech sensors and computing power — have never received a ticket.

Representatives of Google’s self-driving car project have said that in recent months they’ve been trying to program the vehicles to drive less like robots and more like people — in part to reduce the number of times they are hit by other drivers expecting certain driving behavior.

Mountain View police say they regularly meet with the tech giant to make sure the vehicles are operating safely.

This story has been corrected to show Google has publicly reported 17 accidents involving its cars, not 16.