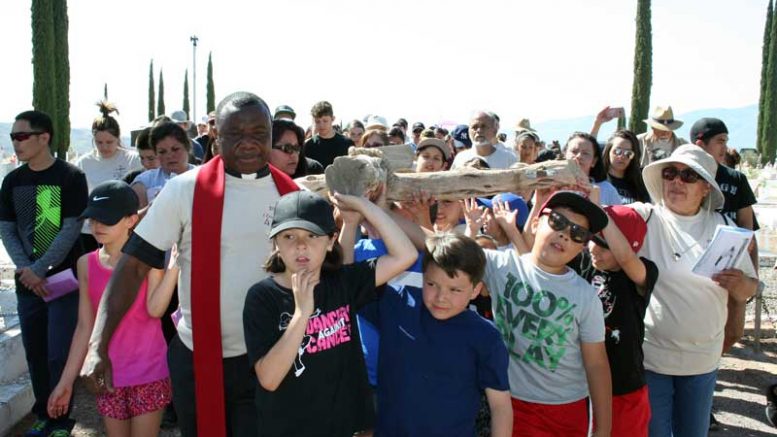 Photo By Gualterio Casias: Father Martin Atanga-Baabuge, left, leads children carrying the cross during the last leg of the April 14 Good Friday pilgrimage from Holy Cross Catholic Church in Morenci to the Sacred Heart Cemetery in Clifton. An estimated 160 people joined in the hour-long pilgrimage.

It was an up and down end of the week for several people. No, it was nothing like an emotional roller coaster. The ups and downs were the hills in Morenci/Clifton-area that an estimated 160 people traversed during the April 14 Good Friday pilgrimage.

Pilgrims began the procession at 8 a.m.at Holy Cross Catholic Parish in Morenci and reached their destination, the Sacred Heart Cemetery, an hour later. During the walk, several of the faithful took turns horizontally bearing the old rugged cross. Fittingly, the cross is made of ocotillo, which is symbolic of this high-desert terrain of southeastern Arizona in which Greenlee County’s three Catholic parishes, St. Mary’s Mission in Duncan, Sacred heart in Clifton and Holy Cross, are located. 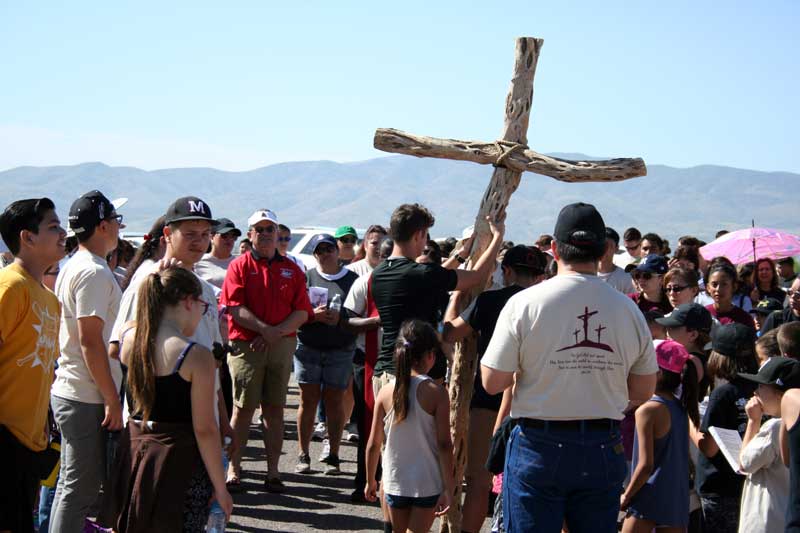 One could not help but think of the song titled “The Old Rugged Cross.”

Several pilgrims remarked that they thought the weather was “perfect” or “near perfect” for the procession. The temperature was at most in the low 70s. The sun shone and the sky was clear, making surrounding mountains stand out against the green flora – creosote bushes and mesquite trees – on hillsides and in ravines. Only long wisps of thin clouds occasionally sailed slowly through the azure sky above the southern horizon. 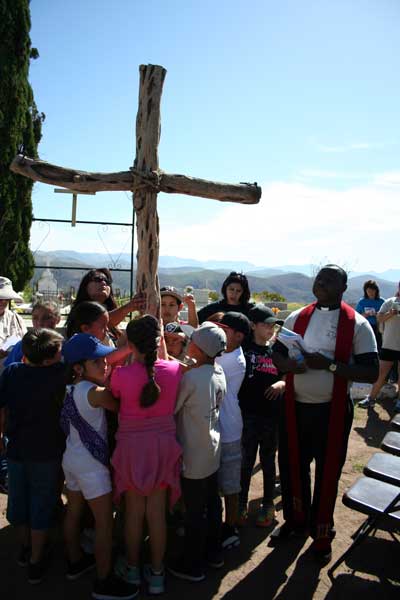 Photo By Gualterio Casias: Children, assisted by adults, finish raising the cross at the altar in the Sacred Heart Cemetery in Clifton. Children carried the cross on the final leg of a pilgrimage from Holy Cross Catholic Church in Morenci to the cemetery. The annual event was held on Good Friday, April 14.

During the procession, pilgrims stopped and observed the 12 Stations of the Cross. At each station parish, priest Father Martin Atanga-Baabaque led the pilgrims in prayer. He serves all three of Greenlee’s Catholic parishes.

One of the last stations was at the bottom of a hill from which only 100 yards or so remained for pilgrims to begin the final, steep ascent to the cemetery. As pilgrims finished arriving at the cemetery, they surrounded the cross, which was being held upright, and Father Martin once more led a prayer. As was the case at the other Stations of the Cross, pilgrims bowed their upper bodies in respect and protocol.

The very last leg of the pilgrimage, about 50 yards, involved children bearing the cross again horizontally. Their destination was the cemetery’s altar. As the youths moved forward with the cross, some of the adults and Father Martin quietly and humbly chanted prayers.

Finally, the cross arrived at the altar where the children were assisted by adults to erect the sacred symbol. It was done very quietly. There were three elderly, gray-haired ladies, devout parishioners, who sat on folding chairs in the shade of one of the giant cypress trees surrounding the front area of the altar. Unable to join in the procession, they visited quietly while awaiting the arrival of the cross. When the symbol of Catholicism and many other Christian faiths arrived, all three made the sign of the cross on their chests, smiled and looked admiringly at the children’s and their assistants’ efforts.

The backdrop to the altar was spectacular. A wrought iron cross set in a rectangle frame is situated permanently above and behind the altar. A cypress tree is also situated behind and next to the altar. The vista from there is of the rugged peaks of steep, cone-shaped hills. The sacredness and beauty of the site was punctuated by the ocotillo cross after it was set in place.

Father Martin conducted the service as total quiet among parishioners reigned. Only the sound of chirping birds, some of which were flitting from tree to tree, was heard. As the service ended most parishioners departed. However, some, mostly younger people, roamed the cemetery to find the final resting places of ancestors – grandparents or aunts and uncles.

An interesting note of unity was the tan T-shirts that many younger and middle-aged pilgrims wore. The front of the shirts bore a cross made of spikes and read: “1 Cross, 3 Nails, 4 Given.” The backs of the shirts showed the silhouettes of three crosses, the middle one representing the one on which Jesus Christ was crucified. Beneath those, the shirts read: “For God did not send his Son into the world to condemn the world, but to save the world through Him. John 3:17.” 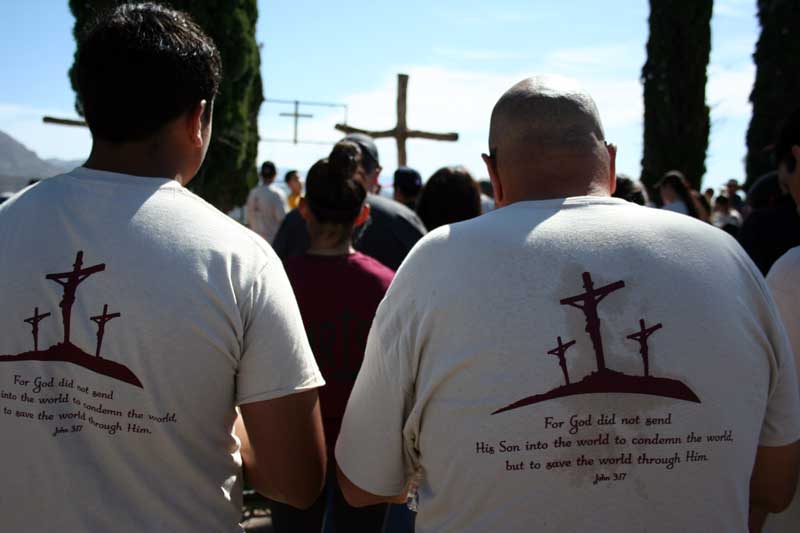 Photo By Gualterio Casias: Two men wearing identical T-shirts stand reverently as the cross is raised at the altar at Sacred Heart Cemetery in Clifton on Good Friday, April 14. The raising of the cross and a ceremony conducted by Father Martibn Atanga-Baabuge finalized an hour-long pilgrimage from Holy Cross Catholic Church to the cemetery.