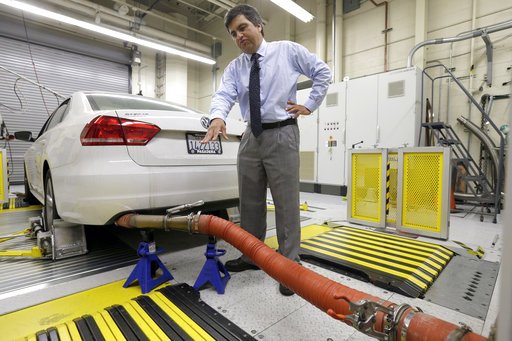 FILE - In this Sept. 30, 2015, file photo, a 2013 Volkswagen Passat with a diesel engine is evaluated at the emissions test lab in El Monte, Calif. Real world pollution from diesel trucks, buses and cars globally is more than 50 percent higher than what government lab testing says it should be. And that translates to an extra 38,000 deaths worldwide from soot and smog, a new study say. (AP Photo/Nick Ut, File)

That extra pollution translated to another 38,000 deaths from soot and smog in 2015, the researchers estimated.

The work published Monday in the journal Nature was a follow-up to the testing that uncovered the Volkswagen diesel emissions cheating scandal. Researchers compared the amount of key pollutants coming out of diesel tailpipes on the road in 10 countries and the European Union to the results of government lab tests for nitrogen oxides.

Experts and the researchers don’t accuse car and truck makers of cheating, but say testing is not simulating real-world conditions.

“The paper shows how much human failure costs,” said Jens Borken-Kleefeld, a transportation scientist at the International Institute for Applied System Analysis in Austria who wasn’t part of the study.

The researchers included a team from the International Council on Clean Transportation, a nonprofit research and advocacy group, that arranged the testing that first showed VW diesel cars were rigged to cheat on emissions tests. They used previously published tests of pollutants coming from thousands of vehicles, all models, to calculate the extra pollution in 2015. Worldwide, three-quarters of that extra pollution is from trucks and buses.

Other research connects soot and smog to heart and lung diseases, with pollution killing more than 4 million people every year around the world, said lead author Susan Anenberg, a researcher at Environmental Health Analytics and a former U.S. government scientist.

In Europe, new truck regulations are working and much of the excess pollution is coming from cars, said study co-author Ray Minjares of the clean transportation group.

Study authors and outside experts said the solution to the problem is stronger enforcement, regulations and testing.

“I do not find these results surprising, but they are significant because the extent of the problem has been underappreciated, and it’s one that too many policymakers prefer to sweep under the rug,” University of Michigan Energy Institute’s John DeCicco said in an email. “So most of what is going on is not cheating but rather inadequate testing and enforcement.”

Allen Schaeffer, executive director of the U.S. industry group Diesel Technology Forum, said it’s impossible to design a lab test that could cover all real-world driving possibilities but industry officials and regulators are working on it.

“It’s important to understand that diesel has been a technology of continuous improvement, meaning that today’s generation of new diesel technology is lower in emissions and more efficient than one built 10 or even five years ago,” Schaeffer said in a statement.

Follow Seth Borenstein at http://twitter.com/borenbears and his work can be found at http://tinyurl.com/sethap