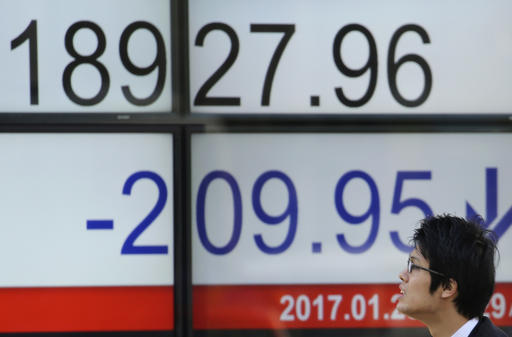 TRUMP ON TRADE: Trump has major U.S. trading partners who worry about his promises to restrict commerce and shift jobs back to the United States. Trump’s inauguration speech Friday repeated those themes but gave no additional details. A Chinese state-run newspaper, the Global Times, said “dramatic changes” lay ahead for the global economic order.

ANALYST’S TAKE: “Trump’s inauguration speech really offered nothing new for investors to latch on, besides harping on old themes of economic ‘carnage’ that will be stopped,” said Mizuho Bank in a report. “His implication that previous U.S. policies did not put America first sounds misguided, and thus any reversal of policy could well prove to be more negative than not,” it said. “The next 100 days would likely keep markets tense on any announcements as his policy platform is likely to see a large discontinuity from previous U.S. policy bias.”

CHINA UPTICK: China’s economic growth ticked up in the final quarter of 2016 but the full-year expansion was the weakest in three decades. The world’s second-largest economy grew 6.8 percent over a year earlier, up from 6.7 percent the previous year. For the full year, the economy grew 6.7 percent, down from 6.9 percent in 2015 and the weakest since 1990’s 3.9 percent. Growth was supported by government spending and a real estate boom. Economists said the temporary upturn was unlikely to last and a renewed slowdown should emerge in coming quarters.

ENERGY: Benchmark U.S. crude shed 79 cents to $52.43 per barrel in electronic trading on the New York Mercantile Exchange. On Friday, the contract jumped $1.10. Brent crude, used to price international oils, retreated 72 cents to $54.77 in London. It soared $1.33 the previous session.