From June 10th to June 14th, there were two reports of local parents leaving their children in hot cars. Multiple people called into the Graham County Sheriff’s Department, reporting these incidents. Investigations are ongoing. Luckily, the children were unharmed by their parent’s forgetfulness. However, many would say that two children left in hot cars were too many.

When a child is left in a vehicle, the windows and roof of the vehicle form a greenhouse effect. This greenhouse effect intensifies the heat, increasing it by thirty degrees at least in the space of an hour. Considering that a summer day in the Gila Valley can be 100 degrees, that means that the interior of the vehicle would reach 130 degrees. Heatstroke will occur when the child’s body temperature rises to 104 degrees Fahrenheit. When the child’s temperature is raised to this level, it causes disorientation, dizziness, seizures, loss of consciousness and/or death.

There is absolutely no safe amount of time to leave the child alone in the car. Children are more susceptible to heat stroke because their body temperatures run higher. Also, children do not have the same ability to cool themselves through sweat. Because of these factors, even minutes left in the heat of a car can prove fatal to a child.

Parents be warned, cracking the window does not make a difference in temperature. It is still too hot. Even though you would never think you’d leave your child in the car, fifty-five percent of cases were with the parents forgetting their child. If you ever see a child in a car alone, CALL 911 IMMEDIATELY and get the child out of the vehicle. You could save a life. 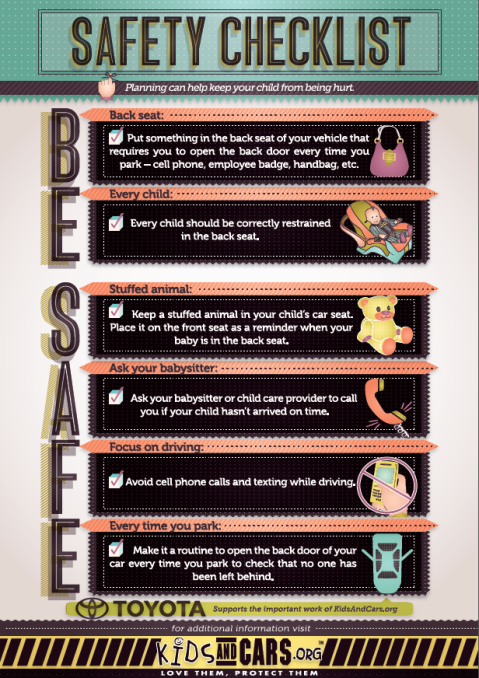