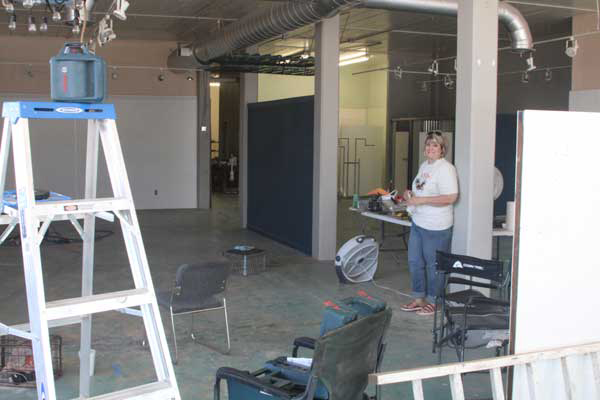 Tricia Garrett,m owner of Prickly Pear Blossoms, takes a break during the first phase of the remodel of the new Gila Valley Made store on Safford Mains Street. The co-op of home-based businesses will open May 28. - David Bell Photo/Gila Valley Central

Garrett, who owns Prickly Pear Blossom, along with partners Torey Cranford of Cakes with TLC and Taylor Ludwig of Lynn Meadows Home, formed the co-op Gila Valley Made to give home-based businesses a chance to sell in a local storefront.

They started last November in Thatcher and have found a new home in Safford in the building that formerly housed Lana’s Real Deals, at the corner of Main Street and 6th Avenue.

The trio spent the last few weeks gutting the showroom, and is ready to start placing new fixtures.

There’s also work being done on the exterior, with Brandt Woods painting his second mural in the Downtown area on the building’s west wall.

“I already had some designs ready to go for this (building) from, like, a year ago, but I didn’t think I could actually get this wall,” Woods said. “When I hear that Gila Valley Made was in it, I was like, ‘Hey, we should talk to them.’ Jeremy Waite actually showed them the designs and they liked it. When they said, ‘OK,’ I made some more designs and they wanted colorful, so this is what we went with.”

Woods recently completed the mural on the northern side of the Richard’s Music building on 5th Avenue.