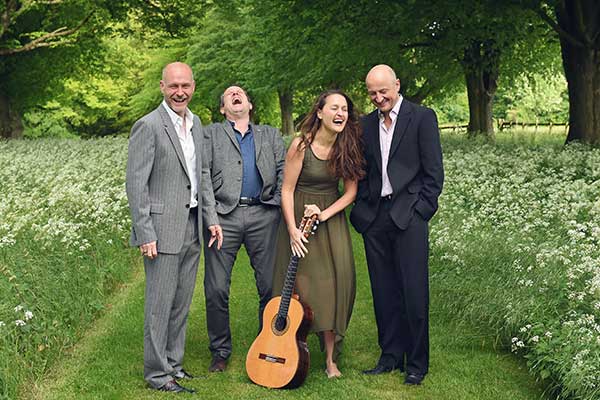 The Gila Valley Arts Council is proud to present the Vida Guitar Quartet on Tuesday, January 15, 2019, 7:00 p.m. at the David M. Player Center for the Arts.

Coming to us direct from London, England, you won’t want to miss this unique opportunity to be entertained by 4 classical guitarists playing together. Vida’s seemingly effortless sense of ensemble and their broad range of timbres and dynamics evokes ‘listening to an entire orchestra and not merely to four guitars. There’s only one word for it: magic.” Gramophone 2011.

Founded in 2007, the VIDA Guitar Quartet brings together four of the UK’s most exceptional guitarists: Christopher Stell, Mark Eden (the renowned Eden Stell Duo), Amanda Cook, and Mark Ashford. The VIDA Guitar Quartet has appeared on some of North America’s and Europe’s most prestigious stages for classical guitar, including, in the USA, the 2015 Guitar Federation of America (GFA) Annual Conference, the 92nd Street Y in New York City, Cornell University Concert Series, Atlanta’s Spivey Hall, Washington DC’s Dumbarton Concerts, the Winter Park (FL) Bach Festival, University of New Orleans, the Long Island Guitar Festival and the Allegro Guitar Series in Dallas, Fort Worth, and Las Vegas. In the UK they have appeared at London’s Purcell Room and Kingʼs Place, The Sage (Gateshead), Turner Sims (Southampton), and St Georgeʼs (Bristol). 2015-16 tours brought VIDA to over 20 U.S. cities. Renowned as educators and for their innovative outreach, VIDA is closely involved with the world’s largest youth guitar education program (200+ students each summer) in the UK, and were Artists-in-Residence at Cal State University Monterey Bay’s Summer Arts program in 2012.  They have given masterclasses, workshops, school concerts, and other outreach activities in connection with nearly every public concert they have performed, and have multi-day residencies coming up in Tallahassee, FL and Hobbs, NM, among other U.S. cities and towns. Following on from their acclaimed début CD, “Love, the Magician,” VIDA released their second CD, “Rhapsody,” in 2013, featuring works by George Gershwin, Malcolm Arnold and Adam Gorb. Their latest CD, released in 2015, is “The Leaves be Green,” with works by British composers including Benjamin Britten, Vaughan Williams, Elgar and more.

Tickets are currently on sale at Richards Music, 428-2442, Pollock’s Western Outfitters and online at www.saffordcenterforthearts.com or at the door. Adult ticket prices this year are only $10 or $15 and are all reserved seating. New this year are special prices for children and students at just $5.00. Adults can purchase tickets in the $10-$15 range and purchase children seats right next to them for only $5.00. GVAC is offering a great way for families to have quality time together.

The GVAC Fine Arts concert series is member supported. We graciously thank many of you, our individual donors who join as supporting members every year giving out of their personal pockets. Membership is vital to helping us make ends meet every year. Membership can range from as little as $25, $50, $100, $250, $500 to $1000, but every dollar is spent on the cost of bringing the artists here to not only perform a concert, but they also spend an extra day or two working with our school children with music workshops and school performances.  GVAC is also very grateful for the support received from the United Way of Graham County, Freeport McMoRan Copper and Gold, the Arizona Community Foundation of the Gila Valley and the Arizona Commission of the Arts. Additionally a big thank you goes out to the Eastern Arizona Courier, MAJIK 100.7 KJIK-FM radio and the Gila Valley Herald for promoting our events to the general public.

GVAC is also hoping to attract new volunteers that can help escort our artists to the classrooms as well as serving on our advisory board of directors. If you might be interested in helping them in this effort, please contact their president, Tom Green, at 428-0081.