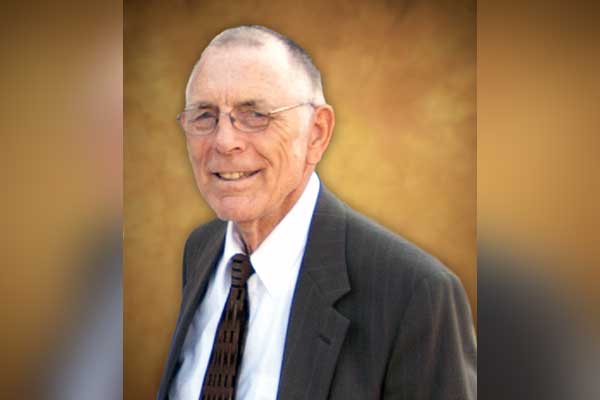 Gerald Ray Pace was born in Lordsburg, NM on May 19, 1931. He was the third of six children born to Hyrum and Melba Duke Pace. He was given the nickname of Jiggs by an aunt who also gave the nickname of Maggie to his sister, Marcia. The nicknames came from a popular comic strip.

Jiggs had a happy, sheltered childhood on the family farm outside Virden, NM with loving parents, uncles, aunts, cousins, grandparents, and church members. As a youngster he was known for taking things apart to see how they worked. When he was about three years old he took his toolbox and climbed a ladder up to where his father was working on the roof of the house. That certainly caused his parents some fright.

Jiggs remembered the family home having a dirt floor, only one bedroom, no plumbing or electricity, and outhouses behind the house. As he grew up he helped his father with the farm. He mentioned that there were always weeds to hoe and that it was difficult to stay awake on the tractor as he rode up and down the long rows in the cotton field. He especially enjoyed deer hunting with his father.

Jiggs played basketball in high school and was given a scholarship to play for the Aggies in Las Cruces. On September 9, 1950, he joined the US Navy, just as his father and older brother had done.

From Boot Camp Jiggs went into Amphibious Construction Battalion One (ACBone). Their Home Base was Coronado Island in San Diego, CA. Their overseas base was at Camp McGill, which was nine miles west and inland from the harbor city of Yokosuka, Japan.

Jiggs served two tours of duty overseas in Japan and Korea, each of one year duration. Both Korea visits were approximately six months. He also served 30 days at Okinawa on maneuvers. He was honorably discharged 25 June 1954. He was awarded the Good Conduct Medal, the National Defense Service Medal, the Korean Ribbon, and the United Nations Service Medal.

While home on leave after boot camp he fell in love with Barbara Davis. They were married in the Mesa temple on June 26, 1951. His first child, GK, was born while Jiggs was overseas and GK was 6-1/2 months old before they actually met. After his four year tour of duty they returned to Virden where Jiggs worked as Ditch Boss of the Sunset Canal before eventually starting work for Phelps Dodge in Morenci.

Barbara passed away in 1968 leaving Jiggs with four children to raise and support. He married Betty Jo Halford in July of 1969. They were married for 42 years before her death in 2011.

Jiggs was always a hard worker and he traveled to find work during the mine layoffs and strikes. He retired from Phelps Dodge after 30 years of service but he didn’t sit around. He started working for Sasha’s Grocery Store. In February of 2003 he was honored as Sasha’s 2002 Courtesy Clerk of the Year for all stores in the SE quarter of Arizona. He retired from Sasha’s after ten years of service.

Jiggs had many hobbies and interests over the years. He was a “rock hound” and was president of the Gila Valley Gem and Mineral Society for many years. He enjoyed going to the lapidary shop where he would cut, slice, and polish the stones he collected to make lovely jewelry, buckles, and bolo ties. He made beautiful macrame plant hangars that he often gave as gifts.

He was a driver for Meals on Wheels for 1-1 /2 years. He also volunteered for the hospital auxiliary for several years, serving as the department head for their work done in the waiting room. Twice he donated a dozen of the macrame plant hangars he made to be sold at their Christmas House fundraisers.

Jiggs served for 25 years in his church alternating as either the Ward Clerk or Membership Clerk. He also served as president of the Eider’s Quorum for five years; High Priest Forum Leader for about two years; Bishop’s 2nd Counselor for 2-1/2 years; Executive Secretary to the Bishop for two years; Assistant Quorum Leader for two years; and he worked at the Family History Center doing Spanish extraction for a year. After the temple was built, he worked there for four to six hours per day, 5 days per week. He was faithful in doing this work for more than seven years. It was there at the temple that he became reacquainted with his high school sweetheart, Jean Pierce Merrell. They married on June 30, 2012 and she brightened his days until her death in February of 2015.

Jiggs was friendly, personable, and generous. He had a great sense of humor and loved to joke around. He had a beautiful voice and loved to sing. He woke his children with a song every morning before school. He also played the harmonica beautifully. Being a “jack-of-all-trades,” Jiggs mastered welding, mechanical and electrical work, along with almost any thing else he set his mind to.

Jiggs’ family grew with each of his marriages and he loved each of the kids and grandkids. He would often show up to visit with gifts of candy, Gatorade, nuts, or other items. He shared these types of gifts with his neighbors also and would often find ways to help them out.

In addition to his wives, Jiggs was predeceased by: his parents; his brother, Tom; two sisters, Lorna and Marcia; his stepson, Dennis Horn; his grandson, Shae Davis; his great-granddaughter, Ella Hughes; his daughter-in-law, Margaret Pace; and his son-in­law, Buddy Howard.

Funeral services for Jiggs will be conducted Saturday, January 30, 2021, at 11:00 a.m., at the Church of Jesus Christ of Latter-day Saints Safford Stake Center by Bishop Floyd Nuttall of the Thatcher Fourth Ward. Concluding services with military honors conferred by the Gila Valley Veterans Honor Guard will follow in the Thatcher Cemetery.

Those who would like to attend the services via Facebook Live can join on Vining Funeral Home’s Facebook page, www.facebook.com/viningfuneral, Saturday morning, January 30, 2021, at 11:00 a.m. (MST).

The family invites those who would like to share memories of Jiggs to join them Saturday evening, January 30, 2021, at 6:00 p.m. (MST) in a Zoom meeting.