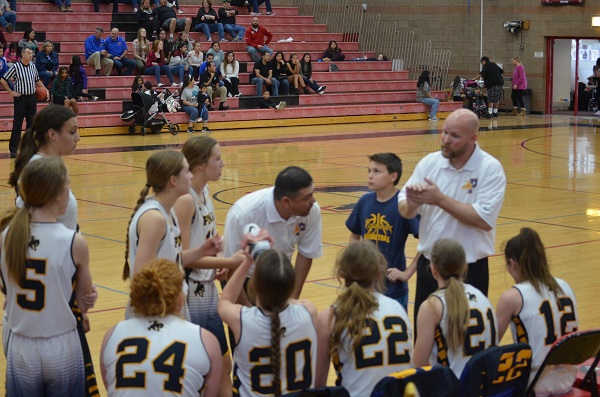 Roy Corona and David Allred instruct the team during a timeout Friday in Prescott Valley. (Photo by Lee Patterson)

PRESCOTT VALLEY — It was a busy day for Gila Valley basketball teams across Prescott Valley on Friday. All six teams that qualified for the tournament from the Gila Valley and two from Greenlee County were in action.

It was a slow start to the morning for Thatcher and they found themselves down 16-10 to the #14 Cougars with 4:12 left in the first half. Then the switch flipped on for the Eagles. Thatcher ended the half on a 13-0 run to take a 23-16 halftime lead. They would stretch it to a 41-26 lead at the end of the third quarter and would coast to the big victory.

Thatcher was led in scoring by Cassidy Wakefield with 15. Mia Carter added 13 and Olivia Lunt had 10 points and 9 rebounds off the bench.

Thatcher will play San Carlos at 10am Saturday in the Quarterfinals.

It wasn’t quite David vs Goliath but it was close. Scottsdale Christian is one of the favorite to win the 2A title and they showed why against Thatcher Friday. Thatcher trailed the entire game. They were able to get the lead down to 4 before SCA went on another run to extended it to double digits.

Thatcher didn’t play bad. They were able to hit shots from the outside as well as find room inside but every time it felt like Thatcher was going to make a run, SCA hit another big shot to shut it down.

The 1st and the 3rd quarters nearly cost Pima the win as they only put up single digits in both quarters. The 2nd and 4th quarters were better offensively for the Riders and they were able to hold on for the victory.

The fouls added up fast in this one as there was 20 fouls called in the first half and over 40 for the game. Aubrie Sherwood led Pima with 14 points and her sister Ashlie had a huge came on the boards with 16 rebounds. Freshman Ashlyn Chlarson had 8 points.

Pima will play #1 Camp Verde on Saturday at 11:30am at Yavapai Community College.

Tim Salyer picked a fine time to have his best scoring game of the year. Salyer poured in 27 points and had 10 rebounds to lead Pima to the win. St. Johns had a tough time finding a defender that could stay in front of Salyer and Riders took advantage of it all afternoon.

Pima relied on their defense to frustrate the Redskins and force bad shots. Pima was also able to get to the foul like 22 times, making 17 of them.

The Riders will play Trivium Prep on Saturday at 1pm at Yavapai Community College.