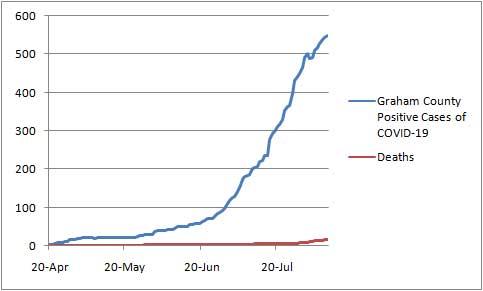 SAFFORD — Four Graham County residents died over the weekend as a result of COVID-19.

Graham County has experienced 16 deaths due to the pandemic thus far, with 12 of the deaths occurring in the last three weeks.

The San Carlos Apache Tribe recorded 35 new cases over the weekend — 16 Friday, 15 Saturday and four Sunday — bringing the tribe’s total to 601. Of that total, 134 cases are still active, 558 have recovered and there have been nine deaths.

There were no new cases reported in Greenlee County, keeping that county’s total at 58, with 14 active, 42 recovered and two deaths.