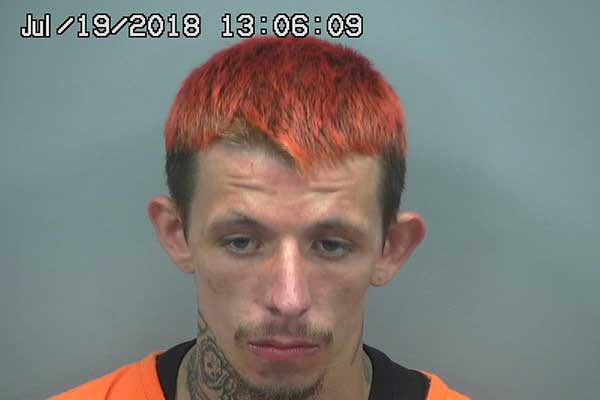 A vehicle that was reportedly stolen from the Canyonlands Community Health Center parking lot on 20th Avenue in Safford was recovered in the Walmart parking lot. The “Jeep-type” vehicle was reported stolen at about 4:30 AM.

Authorities were dispatched to Walmart at about 8:00 AM the same morning in reference to a red jeep with a white tail sticker on the rear window. The reporting party said she had followed the vehicle to Walmart and that it was parked in the Tire and Lube parking lot. The reporting party apparently told authorities that she was nearly in a collision with the jeep and recognized it as her friend’s vehicle. She followed it to Walmart and observed a man and woman get out and enter the store.

One of the responding officers viewed the video footage and advised other officers on the scene that they were looking for a skinny male wearing denim jeans, black shirt and a ball cap. Another officer saw a man in the store matching the description and caught up to him as he was leaving the store on the grocery side. The officer told the man he was being detained and handcuffed him.

The suspect identified himself as Tyler Torres. The officer who had viewed the video footage positively identified Torres as the man seen getting out of the stolen Jeep. Torres denied having any involvement with the stolen vehicle and told authorities that he had walked to Walmart.

The woman was also detained and questioned by police. She apparently said that Torres had given her a ride to Walmart to get a tire fixed.

Torres was taken to the police station for further questioning. He continued to insist that he was never in a vehicle and had walked to Walmart. Then he changed his story and said that he was walking on Robinson Ranch Road and picked up by a female friend who needed help with a tire. He told officers that she was driving a blue colored car and that he helped her load and unload a tire from another vehicle.

One of the officers told Torres that a witness had followed him to Walmart and saw him get out of the driver’s seat, and that the woman with Torres also told police that Torres had given her a ride to the store. Upon hearing this, Torres changed his story to say that he was walking on Robinson Ranch Road when the woman with the blown-out tire pulled up in the jeep and asked him to drive the Jeep. Torres claimed that the woman told him the Jeep belonged to a friend of hers.

Officers told Torres that they didn’t believe he was telling the complete truth. Torres then explained that he had walked to the woman’s house located near Robinson Ranch Road from Dailey Estates. He said that he and the woman had ‘smoked some weed’ and hung out for 4 or 5 hours. He said the woman told him that she had had a blow out near the Mount Graham High School and she needed to get a new tire. Torres claimed that he got an old wheel from the backyard area and put it in the Jeep which he said was already parked in the alley behind the house. He said that the woman told him the Jeep belonged to a friend and asked him if he would drive. Torres insisted that he did not know the vehicle was stolen. When asked how he started the car, he said that it ‘just starts without keys.” He told police that he didn’t think much about it because a lot of cars start without keys.

Another officer joined the interview and asked Torres what had happened. Torres continued to claim that the first time he saw the Jeep was behind the woman’s house. When the officer explained that the story didn’t make sense and began to question Torres, the story changed again.

This time Torres said that he had been with the woman all night and they had gone to a house in Thunderbird where he waited in the car for an hour but never went into the house. They left the house and were returning to the woman’s house when they got a blow out in front of the Safford Cemetery. They left the cemetery on foot and began walking to the woman’s house. The woman was on the phone until they neared the Safford RV Park. Then the woman apparently got off the phone and said her friend’s car was up the road and they could use it.

Torres went on to say that they found the Jeep in a parking lot and that he got into the passenger seat and his female friend jumped into the driver’s seat and used a knife to start the vehicle. He said it started right up as if she’d used a key. They drove to the woman’s house where they picked up the tire. Again, Torres stated that the woman asked him to drive to Walmart.

An officer asked Torres if he thought it was strange that the woman used a knife to start the car. Torres responded that he made a joke out it and that he just assumed that was how the woman’s friend started the car.

Torres: Im in the restroom

Torres: Are thay still in here

Torres: Yuu should come back for that tire

Prettiest Girl: I will

Prettiest Girl: I don’t see them

Torres: That were walking around looking

Torres: Are that out side

Prettiest Girl: Im not sure. Im grocery shooping so I don’t know for sure

Prettiest Girl: I don’t see them push it out for the bathroom for walking around following me

Prettiest Girl: Give me a minute and ill try to go see

Torres: Who flowing u

Prettiest Girl: Nobody is

Torres: any up front

Torres was booked into the Graham County Jail for theft of means of transportation.