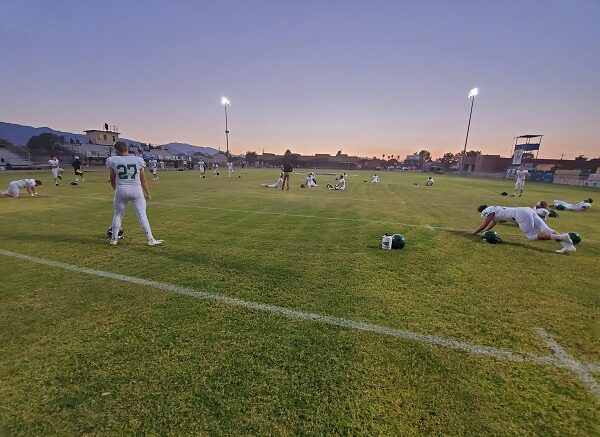 GILA VALLEY — With only two weeks left in the high school football regular season, the playoff scenarios are starting to take shape.

The latest 2A/3A rankings came out on Tuesday afternoon and all of the local teams are still in the playoff hunt.

With a win this week against Pusch Ridge the Thatcher Eagles will be 3A South champions and get the automatic bid into the tournament. They sit in the #9 spot this week, Pusch Ridge is #8. Should the Eagles lose on the road this week there could potentially be a three way tie atop the 3A South which leads to a more complicated scenario for the Eagles playoff seeding.

Safford fell to the #11 spot after their loss on Friday to Pusch Ridge. They have two tough games left on their schedule at #10 this week and at Thatcher next week. The Bulldogs will most likely need to win one of those two games to get into the playoffs.

The reason the 14-16 spots are a dangerous place to be in 3A is the fact that region winners automatically qualify for the state tournament, regardless of seeding. Currently Phoenix Christian at #17 and Monument Valley at #19 are leading their regions and would be moved into the 15 and 16 spot in the tournament, bumping out the two teams who finished the season in those spots.

The top four teams in the San Pedro region are ranked in the top 8 in the latest power point rankings. All four are securely in the playoffs at this point. Benson sits #3, Willcox #5, Pima #6 and Morenci #8.

Willcox plays at Morenci this week. Pima plays at Bisbee and Benson will be at Tombstone. Currently Willcox sits atop the San Pedro and would get the auto bid into the tournament. If Willcox and Pima finish the season undefeated in the region, the team that is ranked the highest will be named conference champion since they didn’t play each other in the regular season.

In the 3A, the region champions will also get a home game regardless of their ranking. For example, if the team that place #3 in the rankings isn’t a conference winner but the team at #14 is, the #3 would have to travel to the #14 team in the first round. The 2A voted to have region champions qualify but will seed the tournament based on power points.

If you are a local football fan, these last two weeks are what you look forward to, when every game on the schedule has playoff implications. Buckle up and hang on. It’s going to be a wild ride.