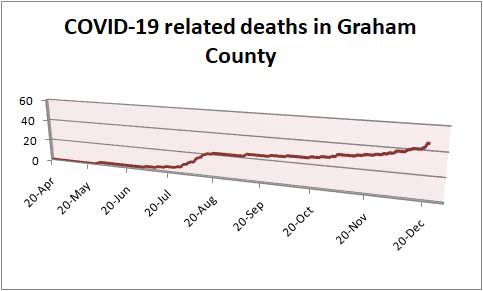 SAFFORD — The weekend proved to be the deadliest thus far for COVID-19 in Graham County, with five deaths, including three on Sunday, the day with the greatest number of deaths in the Gila Valley since the start of the pandemic.

There have been 11 coronavirus-related deaths in Graham County thus far in December, the second most in a month since 13 deaths were recorded in August.

Graham County’s total number of cases has climbed to 2,816, with 34 new cases reported Friday, 28 Saturday, 27 Sunday and 21 Monday. That brings December’s total number of new cases to 601, which is 4 percent behind the peak month of November at the same time.

Currently, 957 cases are considered active and Graham County has a positivity rate of 25.4 percent.

That brings Greenlee’s total to 360, with 129 cases considered active and three deaths.

Greenlee County has a positivity rate of 9 percent.