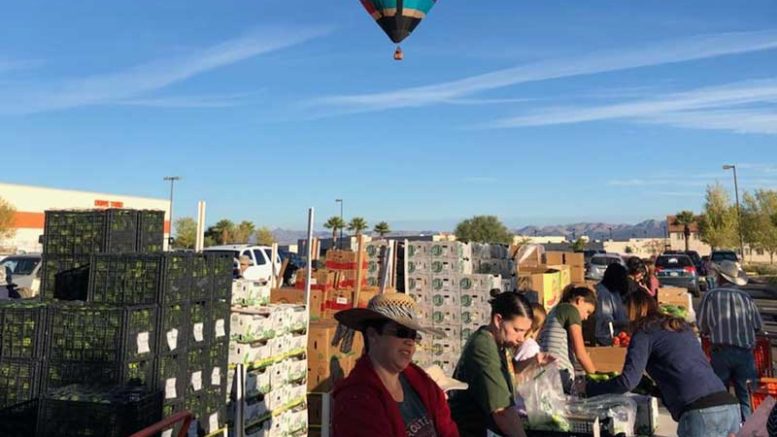 Contributed Photo/Courtesy Chris Taylor: A hot air balloon rises over the first POWWOW of the season.

SAFFORD – With several new faces added to the nutritional morning of service and visiting, the first Produce on Wheels Without Waste (P.O.W.W.O.W) of the season blasted off at the Home Depot Parking Lot on Saturday.

The Borderlands Food Bank has teamed up with the Safford Lions Club this season, bringing more volunteers to the mix. Gila Valley Central visited the first POWWOW of the season on Saturday to see what attendees could expect this season. For those who may have missed it, there’s no reason to worry; the next POWWOW will be Saturday, Dec. 9, starting at 8 a.m.

“The reason the Lions Club is doing this is because the Lions Club International has partnered with them to help combat diabetes,” Taylor said. “And we think that by providing healthy nutritional produce for people will work to combat diabetes. For the whole program statewide, last year alone the Borderlands rescued 30 million pounds of produce last year and expect to do the same this year. So, the stores that can’t take the fresh produce, it’s fresh produce, but they can’t sell it in the stores because they’re already stocked up. Instead of throwing it away they rescue it and provide it for programs like these all across the state.”

Brooke Curley Photo/Gila Valley Central: Produce is left on tables for individuals to choose their allotment of 60 pounds.

Among the volunteers that showed up on the sunny Saturday morning, school counselor Shiloh Wheeler brought a gang of 10 Thatcher High School students. Despite the early hour, the Thatcher teens were cheerful and went about the job of sorting out the produce with smiles on their faces.

“We used to volunteer when they had it last year,” Wheeler said. “We usually come, I bring kids from the high school to volunteer. Last year it was on a Wednesday so they got to miss school so there was a little bonus but this year it was on a Saturday and they still showed up. I think it’s a great opportunity to be able to help out and do this. It’s a great opportunity for our public to get produce for a decent price. It’s fun to help out people and see people.”

Thatcher Mayor Bob Rivera attended the POWWOW and was one of the volunteers handing out produce to families of the Gila Valley. Rivera told Gila Valley Central that he was especially grateful to the high school students who volunteered. Also, Rivera invited everyone to the next POWWOW.

“We just want to thank all the people that were here to help, especially the Thatcher High School kids (who) were brought by Shiloh the counselor,” Rivera said. “They caught on right away and they’re an awesome help. We appreciate them. December the 9th, we’re going to have it again. Sixty pounds for $10, and there’s no income level. It doesn’t matter what income you make, you’re entitled to this.”

As always, the POWWOW offers individuals registered into the program 60 pounds of produce for a $10 contribution. The POWWOW is an element of the Borderlines Food Bank, which is a non-profit organization located in Nogales, Ariz. The organization rescues nutritious produce and ships it to families. By rescuing, the organization, in fact, takes the overabundance of produce that grocery stores don’t have enough room for. Borderlands has been in operation for 20 years and has annually shipped between 30 to 40 million pounds of produce in 39 different varieties. Borderline Food Bank delivers the produce throughout Arizona, including the Tucson and Phoenix areas. If anyone is interested in volunteering at the POWWOW, you can simply show up early to the event and ask for direction from those in charge.

Each POWWOW will be located at the Home Depot parking lot in Safford.

Brooke Curley Photo/Gila Valley Central: Watermelons are some of the prized items of the POWWOW.