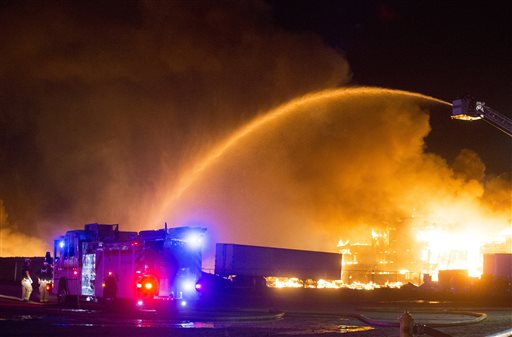 Fire crews battle a blaze in the Phoenix suburb of Gilbert, Ariz., Saturday, April 23, 2016. Evacuations have been ordered for homes near the major fire. (Cheryl Evans/The Arizona Republic via AP) MARICOPA COUNTY OUT; MAGS OUT; NO SALES; MANDATORY CREDIT

GILBERT, Ariz. (AP) — Some residents who had been evacuated near a major fire in the Phoenix suburb of Gilbert returned home early Sunday.

About 60 people were evacuated from the area, according to Diana Rodriguez, a public information officer for the American Red Cross. Evacuees from an apartment complex near the fire were still displaced, she added.

Officials said the five-alarm fire began Saturday at an apartment complex under construction and spread to a home near Gilbert and Warner roads, ABC15 reported (http://bit.ly/1VQNIIB ). Gilbert Fire and Rescue posted on Twitter that homes from Civic Center Drive to Nunneley to Devon had been evacuated.

More than 120 firefighters worked to contain the five-alarm fire.

Gilbert Fire and Rescue posted on Twitter that Warner Road, which was closed while firefighters worked to put out the blaze, has been reopened.