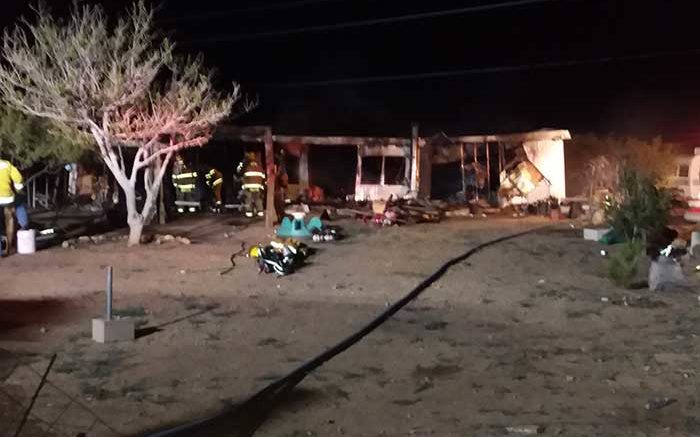 Safford – A fire broke out in a home East of Safford last night right after the family put a load of laundry in the dryer, forcing the quick evacuation of the two adults and two children who live there. One of the home’s occupants, Rachel East, said that the house is a complete and total loss. There was no insurance on the home or it’s contents.

East said that the family arranged to have a dumpster for a week to sift through the rubble. She said that they’re trying to separate the wood from the metal so she can scrap the metal to raise some money.

When the fire broke out, East tried to fight it with a fire extinguisher but to no avail. East said that she battled the blaze just long enough for everyone to get out, and that she ran from the house in her bare feet carrying two babies.

“We had just started the dryer,” East said. “Then all of a sudden the whole house was filled with smoke.  By the time we saw the smoke, the flames were already to the ceiling of the laundry room and wicking out the laundry room door.”

The fire started about 10:00 p.m. Firefighters fought the fire into the wee hours of the morning. “It was about Two or three o’clock when they left, East said. “The fire chief stayed for a while because we were on the phone with the Red Cross.”

The Red Cross has donated $670. Members of East’s church congregation have also donated some items, but the primary need is food for the two young children.

“I had just gone grocery shopping,” East said. “I still have milk and cereal, but I had bought a bunch of produce and non-perishable baby stuff, like baby food and little baby snacks & Gerber meals. I had a bunch of those and they all burned up.”

East says her dad is letting them stay with him until they can get their feet back on the ground, but it‘s pretty cramped.

“Everything’s going alright so far, I mean there’s just been so many miracles so fast. I didn’t have the money to pick up my car from Kempton’s and he said it was alright, and I didn’t have to worry about it. I just burst into tears when he told me.”

A GoFundMe page has also been setup to help the victims of the fire: