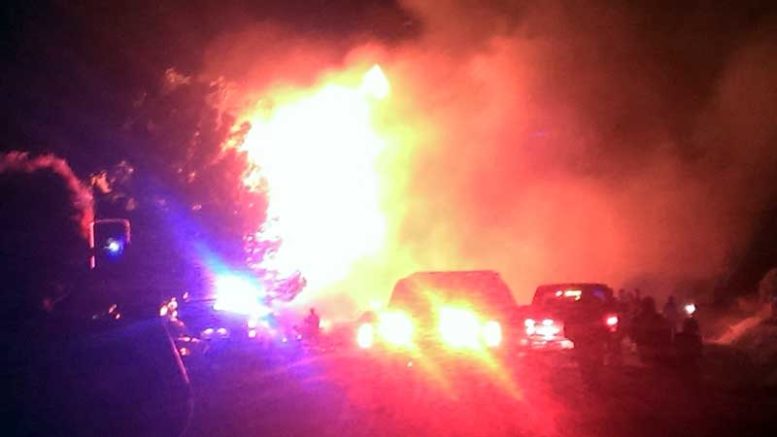 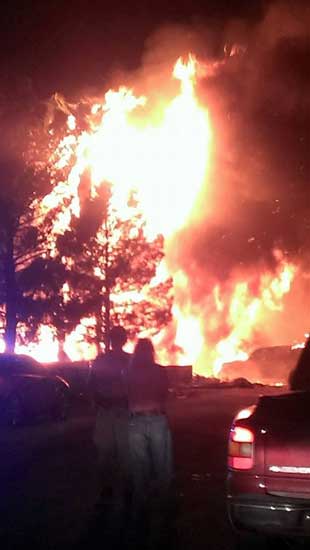 Contributed Photo By Dan Best: Flames were swept 30 feet into the air.

The Safford Fire Department was dispatched to 1279 W. Cholla St. at about 10:02 p.m. regarding a fully involved mobile home on fire spreading to a second residence. Firefighters were en route by 10:04 p.m., according to the department’s call sheet, and arrived at 10:10 p.m., just 8 minutes after being dispatched to a call roughly six miles from Safford’s city limits.

Upon arrival, firefighters found two single-wide mobile homes fully on fire and immediately called for mutual aid from the Thatcher Fire Department, which provided an extra tanker truck. With only a single fire hydrant located at the entrance to the subdivision, the extra tanker truck was very helpful in helping to stop the spread of the fire. The fire was so bad, Pima Fire Department also arrived to help as well.

Safford Fire Chief Clark Bingham gave kudos to the three departments and police for working together at the scene.

“It was quite the conflagration,” Bingham said.

Captain John McGaughey was in charge of the detail Saturday night. He thanked Thatcher and Pima for helping with the blaze.

“We ended up with about 30 firefighters on scene (with) six or seven engines,” McGaughey said. “Thanks to the other fire departments. Their response was really quick and well appreciated.”

A resident of Thunderbird Estates, Nick Cardona, told Gila Valley Central that he heard a loud explosion at around 10 p.m. and he could see the flames from his home. Cardona then took some video footage from the scene.

Another resident reported to Gila Valley Central that one of the occupants, Beverly West, was helped by a neighbor to evacuate the property. The neighbor, Stan Medford, was allegedly awakened by West’s screams for help and assisted her in climbing over a six-foot fence that separates the two properties.

According to Bingham, West and Medford may have suffered some minor injuries, but neither had to be hospitalized.

The residents of the second mobile home, David and Cortney Hardesty and their 8-year-old son, also escaped without serious injury. Reports from the scene indicated that a dog had perished in the blaze. 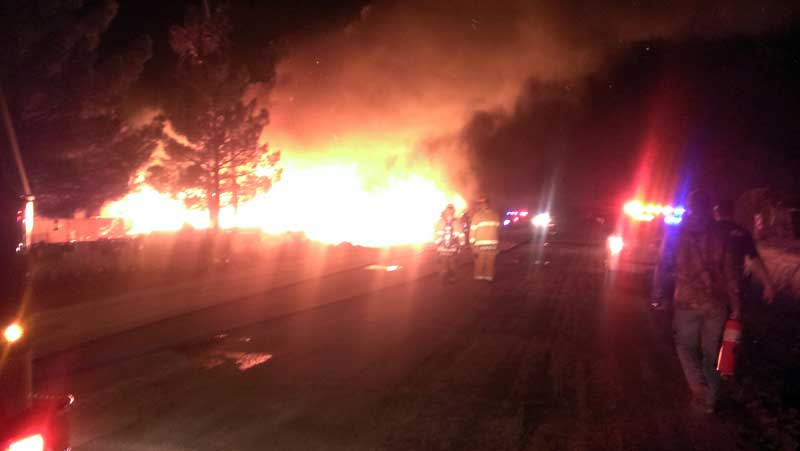 Despite having to fight high winds and a lack of available water due to no fire hydrants in the area, firefighters somehow managed to keep the fire contained to the single property and stopped it from spreading to other residences only 10 to 15 feet away.

“We were able to keep it from destroying somebody else’s house,” Bingham said. “It was crazy with the wind and all the stuff that was flammable in the house that was being whipped up by the wind.”

The fire did spread to a desert area to the north and momentarily caught a neighboring mobile home’s skirting on fire, but it was quickly put out by the resident and a Graham County Sheriff’s deputy, according to McGaughey.

The American Red Cross hands out hotel vouchers for those displaced by a fire, but they are only usually good for a few days. McGaughey was actually on his way to deliver an American Red Cross packet to one of the families when he spoke with Gila Valley Central on Sunday morning. A family friend, Ashlea Kimbrough, has set up a site to accept donations for the families at 1157 N. 8th Ave. in Thatcher. Clothes are a welcome donation. Send a text to Kimbrough at 602-817-8948 for more information about donating to the families.

Firefighters were on scene until about 2 a.m.