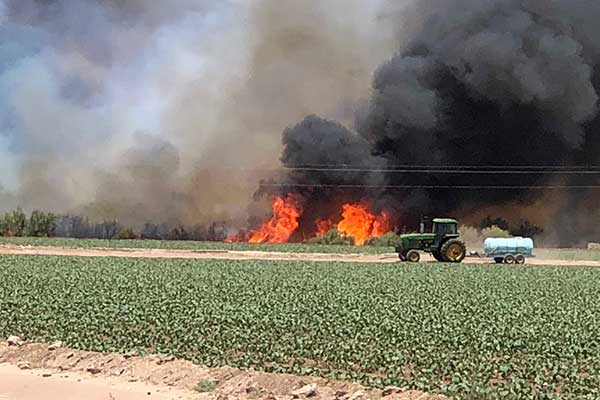 Fire crews are battling a blaze in the Gila River bottom that has consumed more than thirty acres and is now blazing dangerously close to cotton fields on the south side of the river. The fire is burning west of the Safford Bridge. It is unclear how the fire started.

The fire is believed to have started Monday night about 9:30 PM. Safford Fire Department was the first to respond, but were unable to get their trucks close enough to fight the blaze. Control was turned over to the Arizona State Forestry Department.

Currently there are two fire crews and a Bureau of Land Management fire engine fighting the blaze. According to the State Forestry Department, there are approximately 50 people fighting the blaze. The fire is burning a lot of Salt Cedar that burns hot and makes it difficult for fire crews to get close enough to extinguish it. The fire could burn for up to a week before crews have it fully contained.