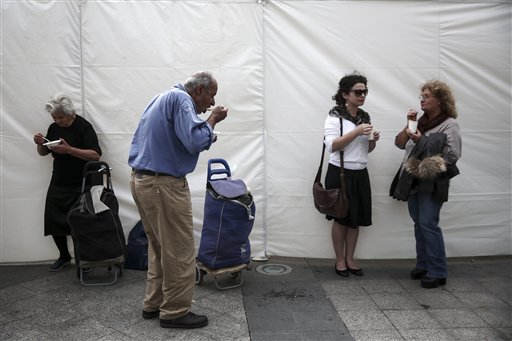 People eat meals made with 'wasted' produce deemed unsuitable by food stores because of their appearance, during an event against food waste, in Athens, Greece, Sunday Oct. 11, 2015. The event was part of the 'Feeding5000' campaign which aims to highlight the waste of foodstuff in advanced societies. (AP Photo/Yorgos Karahalis)

ATHENS, Greece (AP) — Thousands of Athenians have turned up to consume more than a ton of fruit and vegetables rejected by stores in an event that highlights the waste of food in advanced societies.

Despite the overcast sky, people lined up in a central square in the Greek capital on Sunday to eat briam, a casserole medley of vegetables, such as eggplant, zucchini, carrots and potatoes, as well as a dessert of fruit salad.

The event was part of a global campaign called “Feeding5000.”

The organizers, global non-governmental organization Feedback, received the vegetables from farmers after they had been rejected by stores because they were misshapen, but otherwise perfectly edible, they said.

About a third of the annual global foodstuff production gets lost or wasted, Feedback says.