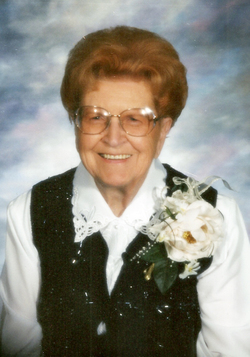 She grew up in Pima with all the freedom & fun of youth. Ethel loved learning & school. She graduated from Pima High School.  Ethel married Christopher Smith in Los Angeles CA on December 23, 1943 and were later sealed in the Mesa LDS Temple. They had two daughters, Pam & Val, along with their half-brother, Ron Johnson, who they raised in LA.

She worked in the banking industry for 25+ years, continuing her education & advancing from teller to Assistant bank manager & loan officer. She received several awards for her performance at the bank. She was a faithful member of the LDS church. She served in many positions; including: chorister, Sunday School secretary, Jr Sunday School coordinator, Mutual MN & Gleaners, Family History extractor, & Visiting Teaching Supervisor, which she held until her death.  She loved doing genealogy, growing roses, gardening, decorating cakes and sewing. But most of all spending time with her family.

A viewing will be held on Friday, October 30th from 6 – 8pm at the McDougall’s Caldwell Funeral Chapel and again on Saturday, October 31st, from 10 – 11am at the Pima Stake Center followed by the funeral at 11a.m.

Don’t cry because it’s over;

Smile because it happened.