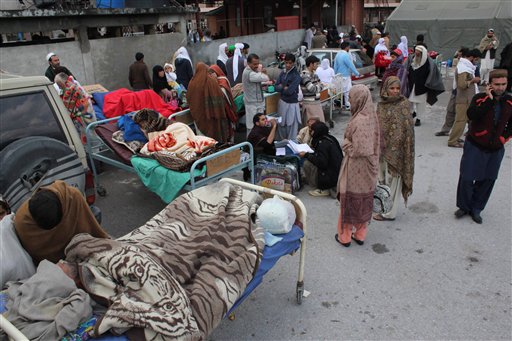 People injured from an earthquake receive treatment outside the Ayub Medical Hospital in Abbotabad, Pakistan, Monday, Oct. 26, 2015. One of Afghanistans most isolated and poverty-stricken regions was hit by a massive earthquake on Monday that reverberated across Asia, shaking buildings from Kabul to New Delhi, cutting power and communications, and killing almost 200 people, mostly in the remote mountain regions near the Afghan-Pakistan border. The number of casualties on both side of the border was expected to rise. (AP Photo/Aqeel Ahmed)

PESHAWAR, Pakistan (AP) — Officials say rescuers are struggling to reach quake-stricken regions in Pakistan and Afghanistan as the combined death toll from the previous day’s earthquake rose to 311.

According to Afghan and Pakistani officials, 237 people died in Pakistan and 74 in Afghanistan in the magnitude-7.5 quake, which was centered deep beneath the Hindu Kush mountains in Afghanistan’s sparsely populated Badakhshan province bordering Pakistan, Tajikistan and China.

In Pakistan, authorities say they are struggling to reach remote mountainous quake-affected areas.

The army used helicopters Tuesday to transport supplies to the victims and military engineers were trying to restore communication lines disrupted by landslides triggered by the quake. Thousands of homes have also been damaged.