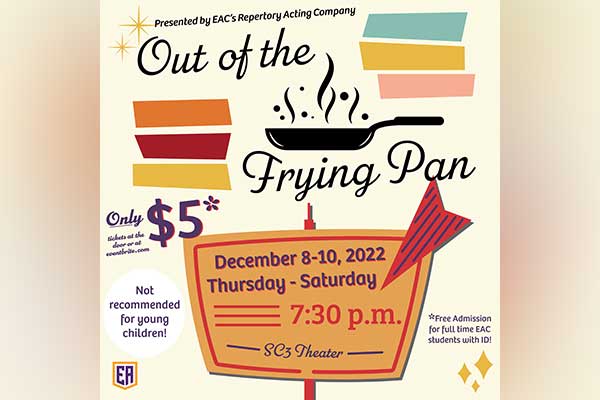 THATCHER, Ariz.—Eastern Arizona College’s Repertory Theatre Company will present Francis Swann’s “Out of the Frying Pan” in the SC-3 Theater, Dec. 8-10, 2022, at 7:30 p.m. Admission is $5/person and tickets are available on EAC’s home page or at Eventbrite.com. The show is not recommended for young children.

In Francis Swann’s classic, lighthearted, and fast-paced comedy “Out of the Frying Pan,” six starving young actors are looking to make it in show business. The year is 1945 and the kids secretly share a rundown New York apartment positioned right above an eccentric Broadway producer.

The actors and roommates plot is to rehearse one of the producer’s murder mysteries, finagle him upstairs to see a performance, and convince him to make them all Broadway stars. When the producer suddenly appears one night to borrow a cup of flour, the kids aren’t going to let him leave until he sees them perform…and anything goes!
Unfortunately, the actors’ well-rehearsed plans end up falling gloriously to pieces as one disaster follows the next, eventually throwing them into an improvisational circus with real cops, a prominent politician, a quirky landlord and one “in the wrong place at the wrong time” unconscious debutante.

For tickets to “Out of the Frying Pan,” visit eac.edu and click “get tickets.” Admission is $5/person.