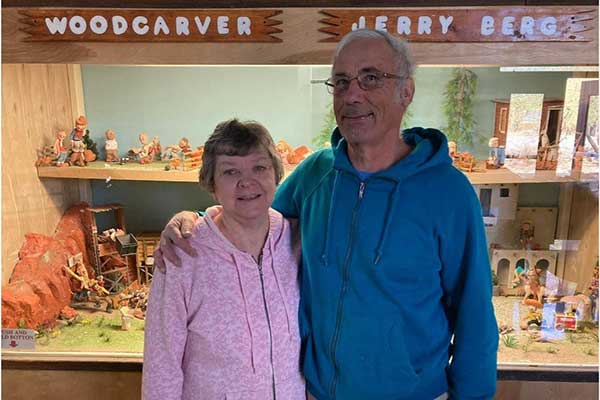 The four, large displays are filled with hundreds of individually hand-carved Western characters, buildings, and animals in hilariously exaggerated situations.  The displays are a team effort by Berg and his wife, Karen. He imagines, hand-carves, and paints the figures, and she helps to set up the displays.

Berg is no stranger to the Discovery Park Campus, he previously operated the train that ran throughout the grounds.  He now spends his free-time working on his collection of model railroads in his basement.

He has been carving and creating miniature worlds all of his life.   He explains that his inspirations for his carvings have come from real-life experiences, and that by viewing the collection you’ll wonder what an exciting life he has led.   Jerry grew up on a farm in the Midwest, but moved to the Gila Valley after he and Karen married and eventually retired from his job with the U.S. Postal Service after 28 ½ years, and then spent some time sharing his passion by teaching a woodcarving class at Eastern Arizona College.

Berg has displayed his woodcarvings throughout the state at the previous Hidden Valley Inn restaurant and saloon in Tucson, the annual Graham County Fair, former Gila Valley Cowboy Poet gatherings, and most recently at the Old Tucson Studios.

The permanent display is housed in the upper level of the Adult Education Building at EAC’s Discovery Park Campus and is open for public viewing at no charge.  The Campus is open Monday – Friday from 8 a.m. to 4 p.m., and Saturdays from 4-9 p.m.  For access to view the Jerry Berg Woodcarving displays, contact the staff at the main entrance of the Governor Aker Observatory.  Plan on staying for a while to enjoy the “History of Astronomy” galleries and ride the “Polaris” Space Shuttle Simulator, then explore the native habitat and the riparian area pond along the “Nature’s Hide-away” trails.

For more information on the Jerry Berg Woodcarving displays or the EAC Discovery Park Campus, please contact us at (928) 428-6260 or go to www.eac.edu/discovery park.